The red-hot container shipping market continued to ease off quietly, according to two much-followed indicators but the rates were double than the year-ago period. 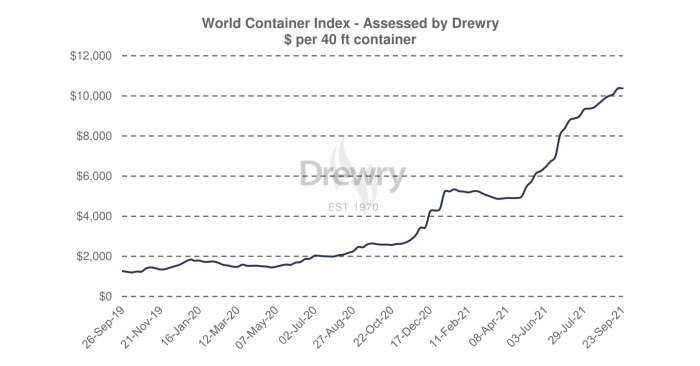 September 25, 2021: The red-hot container shipping market continued to ease off quietly, according to two much-followed indicators but the rates were double than the year-ago period.

The Drewry World Composite Index (WCI), after 22 consecutive weeks of rally, was steady during the week ended September 23. The WCI was at $10,377 per 40ft container (FEU), which is 299 percent higher than the same week last year.

Spot rates from New York to Rotterdam dropped 8 percent, or $91, to $1,107 per FEU. Rates on Los Angeles to Shanghai and Shanghai to New York fell 3 percent and 2 percent to reach $1,404 and $15,849 per FEU, respectively, the release added. Rates on Shanghai-Rotterdam, Rotterdam-Shanghai, Shanghai-Los Angeles and Rotterdam-New York were stable at the previous weeks level.

Drewry is expecting rates to remain steady in the coming week.

Lars Jensen, a leading expert in the container shipping industry, in his latest LinkedIn post said “the rate increases have been slowing down in the past couple of weeks but from a macro perspective it has not quite stalled yet.”

Dr Subrata K Behera, Manager – Ports and Containers Research, Drewry, said the spikes in container freight rates will decline in the coming quarters but rates are going to be high for some more time. “What we can say now is the rate of increase is going to slow down,” Dr Behera told ITLN.

The spot freight rate for containerised goods from North Europe to the US East Coast has been 210% higher than last year (1 July – 23 Sept), according to BIMCO.

BIMCO chief shipping analyst Peter Sand said in his latest weekly report the Transatlantic average spot rates reached $5,798 per FEU on July 1 before flatlining just south of $6,000 at $5,893 per FEU on September 23.

Dr Behera added that rate freezes announced by shipping companies like CMA CGM and Hapag Llyod are not uniform. “The current container freight scenario is a result of a number of issues,” Dr Behera added.

Dr Behera said the move towards longer-term deals could possibly give both shippers and the shipping lines visibility about future earnings.”Such deals were not being offered by shipping lines. With long term deals, manufacturers can easily plan their production and delivery schedule,” Dr Behera added.