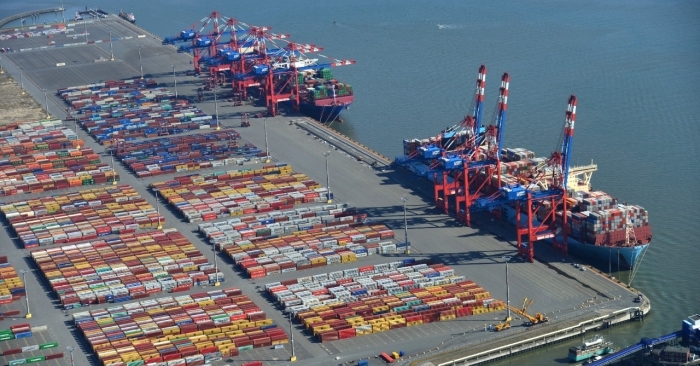 The parties have agreed not to disclose the purchase price, the statement added. No other details were available immediately.

Holger Banik, managing director, JadeWeserPort-Realisierungs GmbH & Co. KG, said: “I am very pleased that the shipping company Hapag-Lloyd appreciates the great potential of Germany's only deep-water container port and wants to use it. With its modern infrastructure and the superstructure of the terminal operator, JadeWeserPort Wilhelmshaven offers ideal conditions for handling its large container ships as well. The task now is to further develop this port infrastructure in proven co-operation with EUROGATE.“

Dr. Bernd Althusmann, minister for economic affairs, Lower Saxony, said: “The decision of Hapag-Lloyd, Germany’s leading shipping company, to participate in the EUROGATE Container Terminal Wilhelmshaven at JadeWeserPort is a good signal for the port, the region, Lower Saxony and Northern Germany.”

“As the only deep-water port on the German North Sea coast, JadeWeserPort has a unique selling point that stands out in the container business - Hapag-Lloyd has also recognized this. This forward-looking engagement will help to use the port’s potential even better and actively shape its development. The collaboration of a Hamburg shipping company and the Bremen terminal operator EUROGATE in JadeWeserPort, a joint project of Bremen and Lower Saxony, also reflects a matter that I consider to be very important in view of the international competitive situation: We will not be able to assert ourselves in this competition alone but only if we understand our various locations as one "Port of Northern Germany" and work more closely together. "

The move earlier this month by Hapag-Lloyd to follow French carrier CMA CGM by announcing a halt in spot rate increases as container freight prices on most trade routes hover at record highs has left the industry grappling for answers.

The supply line crisis hitting the global economy is now facing a new crisis - almost 150 ships are anchored around key ports in China - Shanghai & Ningbo - to load containers, according to eeSea, a company that analyses carrier schedules. There are now over 240 container ships waiting for berths across China, eeSea data show.