The supply line crisis hitting the global economy is now facing a new crisis - almost 150 ships are anchored around key ports in China  - Shanghai & Ningbo - to load containers, according to eeSea, a company that analyses carrier schedules. There are now over 240 container ships waiting for berths across China, eeSea data show. 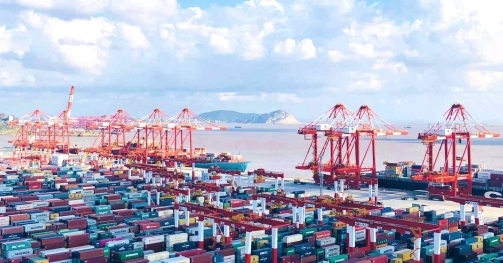 September 27, 2021: The supply line crisis hitting the global economy is now facing a new crisis - almost 150 ships are anchored around key ports in China - Shanghai & Ningbo - to load containers, according to eeSea, a company that analyses carrier schedules. There are now over 240 container ships waiting for berths across China, eeSea data show.

“What you’d rather have is more stability, not these swings, and I think what everybody fears are that the swings will become even more volatile, '' Simon Sundboell, founder of eeSea, told American Shipper. “When the system is already this stretched, all of these unexpected events can be a causal factor in congestion.”

Ports in the Asia Pacific continue to be severely congested, Maersk said in its September Asia Pacific market update released today. “With continued high yard density issues and weather disruption since July (i.e. 3 typhoons and 6 tropical storms), operational challenges remain in port operations and the situation is not expected to improve in the immediate future.”

Experts are worried about the looming crisis. “We estimate that 20 percent or more of all container ships in the transpacific are currently sitting idle as they wait for a slot to unload at overloaded ports,” Ryan Petersen, CEO, Flexport, said in his recent LinkedIn post. “This is unprecedented congestion and causing massive disruption for businesses of all sizes. Rates are sky high, transit times are horrendous.”

Niki Frank, CEO, South Asia and CEO India, DHL Global Freight Forwarding, said the situation in the ocean freight markets is deteriorating once again as we are heading into the peak season. “We are in the middle of a crisis already but it will get worse before it gets better,” Frank told ITLN.

In a global operations update released earlier this month, Maersk had said: “Currently, Vietnam is suffering and in the southern cities where a lot of factories and warehouses are located, Covid-19 cases are on an increasing trend and lockdowns are to continue. This has a direct impact on our ocean sailings and our ability to export your goods. This is not because the vessels are not sailing, but even in a best-case scenario, a delay of 1-3 days in a port on a 12-port rotation often means that a roundtrip of 10 weeks can take 11 or 12 weeks.”

Freight rates steady, likely to remain high
The Drewry World Composite Index (WCI), after 22 consecutive weeks of rally, was steady during the week ended September 23. The WCI was at $10,377 per 40ft container (FEU), which is 299 percent higher than the same week last year.

The rates were expected to maintain their current levels for months to come as US imports showed no signs of easing at least through the August-November peak season, S&P Platts said in its weekly release.

“The higher end of the ranges represented the most urgent cargoes that shippers were scrambling to get into the US for the late November start of the holiday shopping season, a window that was rapidly being closed by supply chain gridlock on both sides of the Pacific Basin,” the S&P report added.

US Federal Maritime Commission chairman Daniel Maffei has asked container lines to explain their congestion-related levies amid an outcry from beneficial cargo owners “many of which have built their business models around low transport costs. Most of these extra charges have been filed with the FMC in line with regulatory requirements. While carriers may be following the letter of the law, they are not following the spirit of it,” Maffei told Lloyd’s List in a recent podcast.

China’s October Golden Week, Christmas and Chinese New Year will bolster strong demand for container shipping for the last quarter of 2021, Maersk said, and is expecting equipment availability to “continue to be tight in Q4 2021, especially in China and Vietnam.”

On outlook for key trade lanes, Maersk is expecting strong demand in the Asia-Europe route and vessel space to be very tight. “Maersk is planning to reduce port calls to improve reliability and has contingency plans to mitigate the impact of equipment shortages in Yantian and Nansha and feeder capacity shortages in Southeast Asia.”

On the Asia-North America lane, Maersk expects strong demand in Q4 “but the overall North American ports situation has deteriorated recently. We expect the loss of capacity from missed sailings to continue.