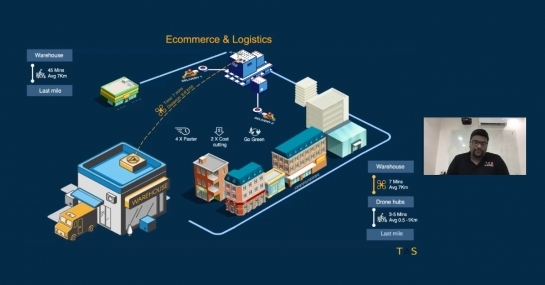 "For SpiceJet, we are looking for cargo delivery with 5kg in the initial stage and plans to scale up to 25 kg within the BVLOS experiment. After the success of this experiment, SpiceXpress would like to go for a full stream adaptation and planning to go up to 100 kg," he said.

He was doing a presentation on the first day the three day Cargo Drone Virtual Summit organised by STAT Media Group.

BVLOS experiment
In 2019, the Directorate General of Civil Aviation called drone companies through an expression of interest to conduct the Beyond Visual Line of Sight (BVLOS) experiments. Only consortiums could apply for the trials and each consortium should have a manufacturer, operator, Unmanned Traffic Management (UTM) and a safety expert. Upon gaining permission based on the DGCA criteria, the authority allows space for each consortium to conduct trials. So far DGCA has approved 20 consortiums and is expected to complete the process by the end of next year.

Throttle is part of three different consortiums, namely TAS, SpiceJet and Dunzo, which were granted permission to do the BVLOS trials for the making of evidence-based regulations. In terms of TAS consortium, we are primarily going to focus on healthcare, which is the time-critical delivery and for Dunzo we will be making drones for the last mile delivery of goods. Battery technology, air traffic safety and training are still challenges that Throttle is working on right now.

E-commerce & price range
"E-commerce & logistics is where the drones will be a game-changer and particularly in the last-mile. The last mile is the most challenging part of any supply chain compared to first or middle mile parts. Even with the BVLOS experiment, we are trying to bring in hub to hub and hub to spoke delivery of goods using drones instead of a hub to an unknown address, which is very challenging in cities like Bengaluru. Drone technology could half the cost of delivery and increase the speed of delivery by 4x," noted Kandasamy.

"Everybody is asking about the affordability of drone operations and price range it will have. But right now as we are still testing we don't have the number to show. However, if you bring drones into a mass-scale operation you will get half the price of what you have been paying in a traditional method," he added.