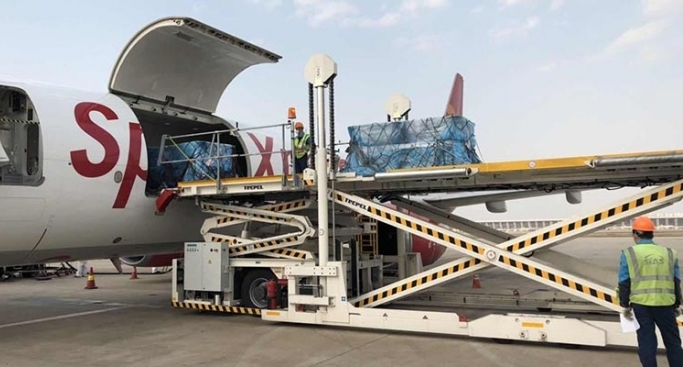 X
SpiceJet has till date transported over 2,700 tonnes of cargo on more than 300 flights since the nation-wide lockdown began.
Our Correspondent15 April 2020 9:04 AM GMT

SpiceJet has till date transported over 2,700 tonnes of cargo on more than 300 flights since the nation-wide lockdown began.

SpiceXpress freighter SG 7016 is on its maiden flight to Shanghai,China right now! Pictured here at 39,100 feet over the city of Kunming, at a speed of 510 knots, a short while before it touches down in Shanghai to bring back critical medical supplies!@AjaySingh_SG @HardeepSPuri pic.twitter.com/HlGEautpW4

Ajay Singh, chairman & managing director, SpiceJet, said, “From today, SpiceJet freighters have begun ferrying crucial medical supplies from China. In addition to Shanghai, we are also operating freighters to Singapore and Sri Lanka today. Regular SpiceJet cargo flights are also being operated to Hong Kong, Kuwait, Abu Dhabi, Ho Chi Minh City and other places while our domestic cargo operations have been significantly boosted by our passenger aircraft fleet where both our B737 and Q400 aircraft have been deployed to operate cargo-on-seat flights. We have put our resources to maximum use transporting over 2,700 tons of cargo on more than 300 flights since the nation-wide lockdown began.”

SpiceJet is also operating a freighter flight to Colombo carrying farm produce from West Bengal and another cargo flight to Singapore today.

On April 10, the airline operated its first-ever cargo flight from Hyderabad to Ho Chi Minh City carrying medical supplies while another cargo freighter brought in critical medical equipment to Bengaluru from Singapore. The airline operated its first cargo freighter on the Chennai-Singapore-Chennai route on April 9 to bring critical medical equipment and devices to India.

SpiceJet has been regularly using its Boeing 737 and Bombardier Q400 fleet to carry cargo in the passenger cabin. The airline operated the country’s first cargo-on-seat flight on April 7.

On March 29, SpiceJet operated a special flight between Delhi and Jodhpur to facilitate transportation of 136 Indian passengers evacuated from COVID-19 hit Iran to a Government quarantine facility in the city.

SpiceJet operated a special charter flight on March 27 from Delhi to Coimbatore on Government's request and transported a Hazmat suit that is helping local authorities replicate and start local manufacturing. The airline helped transport an emergency consignment of IR Thermometers, required to detect COVID-19, to Kolkata from Hong Kong on March 26.

The airline has also operated special cargo flights to Abu Dhabi, Kuwait and other countries taking fresh fruits and vegetables and helping Indian farmers maintain continuity of their supply chains in addition to operating dedicated services from Chennai & Vishakhapatnam to Surat & Kolkata.