July 1, 2019: Low-cost carrier SpiceJet has become the only airline to offer direct air connectivity between Guwahati and Dhaka with the launch of its non-stop flight on the route. 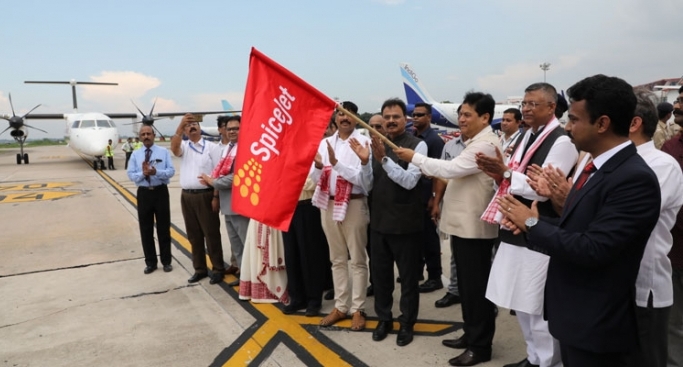 July 1, 2019: Low-cost carrier SpiceJet has become the only airline to offer direct air connectivity between Guwahati and Dhaka with the launch of its non-stop flight on the route. The airline's Guwahati-Dhaka flight is the first-ever to be operated under International Air Connectivity Scheme (IACS). SpiceJet is deploying its Bombardier Q400 on the sector.

The launch was initiated with the customary lamp lighting ceremony thereby marking the formal announcement of SpiceJet’s SG 78 Guwahati to Dhaka flight. The inaugural flight from Dhaka was greeted with a grand water cannon salute at Guwahati’s Lokpriya Gopinath Bordoloi International Airport. Passengers travelling from Dhaka will now be able to easily travel to a host of other cities both on SpiceJet’s domestic as well as international network via multiple onward connections.

Maharshi said, “We are extremely delighted to launch our first ever direct flight under the International Air Connectivity Scheme between Guwahati and Dhaka. We believe that the tremendous success of RCS can be replicated in IACS as well thereby making international air travel much more affordable and convenient for Indians. Enhancing connectivity to the North-East has always been on top of our agenda and this new flight marks an important milestone in this regard.”

“The credit for this landmark flight goes to Sarbananda Sonowal, chief minister of Assam. It is thanks to his vision and efforts that the first flight under IACS is a reality today,” added Maharshi.

SpiceJet's cargo arm SpiceXpress also recently announced that it is planning to introduce freighters from Mumbai to Dubai, effective August 1, 2019 and the launch of its Mumbai-Kabul freighter services in July.