Second edition of AUTO SCM Summit kicks off in Pune

December 5, 2017: The second edition of Auto SCM Summit had a grand opening at Courtyard Marriott Chakan, Pune with a full house attendance of industry stakeholders. 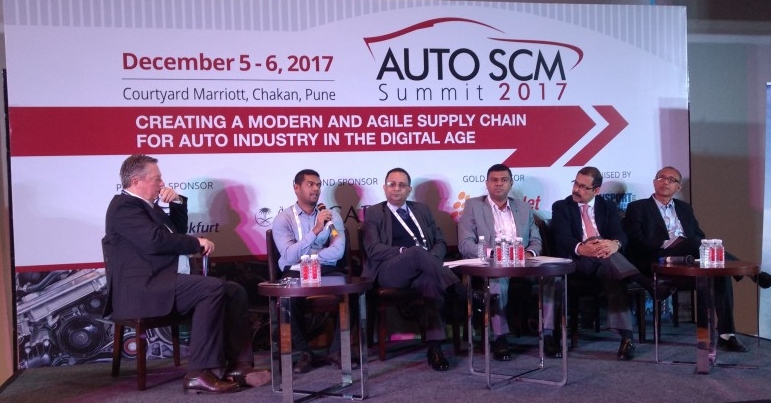 December 5, 2017: The second edition of Auto SCM Summit had a grand opening at Courtyard Marriott Chakan, Pune with a full house attendance of industry stakeholders. Organised by Indian Transport & Logistics News (ITLN), the two-day event is themed on “Creating a modern and agile supply chain for auto industry in the digital age”.

The summit brought together supply chain managers of automotive manufacturers, logistics service providers, airports and airline operators discussing ideas and sharing best practices to mutual benefits. With Indian automotive industry being one of the largest in the world, AUTO SCM Summit played a perfect platform to network with the right set of business associates.

The automotive industry accounts for 7.1 percent of country's GDP. India is also a prominent auto exporter and has strong export growth expectations for the near future. According to Society of Indian Automobile Manufacturers (SIAM) report, the industry produced a total 17,097,096 vehicles including passenger and commercial vehicles, three wheelers, two-wheelers and quadricycle in April-October 2017 as against 15,811,071 in April-October 2016, registering a growth of 8.13 percent over the same period last year.

Making an opening remark Roland Weil, vice president, sales, Cargo, Fraport AG, said, “We all know that air freight consists of a small portion of shipments coming from automotive supply chain and when it comes to air shipment it is time and cost sensitive. In the next five years, we would still like to be the largest air cargo gateway in Europe to the world. Our aim is to carry 3.2 million tonnes of cargo at airport, 2.2 million by air and another million by road this year.”

The session delved upon topics like how vehicle manufacturers are operating more flexible production techniques with smarter supply chains and how sophisticated demand planning, variable cost structures and better integration with suppliers is making the automotive supply chain easier to manage. The panel members also spoke on how intelligent forecasting and inventory management are not just improving efficiency but also driving a seamless supply chain and role of ports, airport, carriers in enhancing the logistics value chain for the auto industry.

Highlighting the scenario of the airports in India, Gazder said, “By 2020 Indian aviation sector is poised to be number 3 in the world. Pune airport stands at number 4 in handling total cargo after Chennai, Ahmedabad and Kolkata. We have an international cargo terminal in Pune and will come up with a new Integrated Cargo Terminal in Pune in the next 36 months. This will augment the capacity and make the facility future ready.”

Shubhendra has extended support and invited suggestions from the industry. He informed that in the next six months, the entire system will be full-fledged digital. “We have started international cargo shipment in Pune and soon will start transshipment cargo from Pune Airport,” he added.

“For us the key is to improve data efficiency and quality. This will result in efficiency in operations. However, infrastructure bottlenecks are creating shipment problems,” stated Vohra.

Meanwhile Borkar, “We heavily invest in training and on better forecast and upstream and downstream of supply chain. We are moving to forecasting techniques. We focus on agile supply chain and the new terminology that is making a buzz in the industry is 'Leagile' (lean + agile) supply chain. Also, we need to make careful decision on where to mechanise and where to automate.”

The key sponsors for the event were Frankfurt Airport, Saudia Cargo and SpiceJet. Federation of Indian Export Organisations (FIEO) also extended their support to the event.