Rotterdam, Singapore to face highest congestion due to Suez incident

April 24, 2021: Major container gateways in Europe and Southeast Asia have started to experience congestion issues, with Rotterdam and Singapore facing the highest risk, following the six-day closure of the Suez Canal in late March 2021, said Everstream Analytics in a new report. 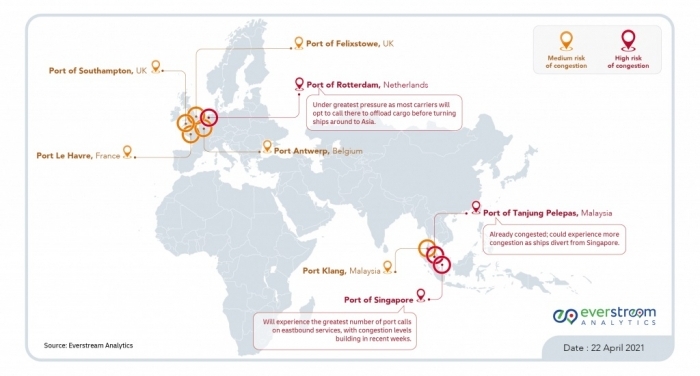 X
The Port of Singapore has faced an uptick in vessel berthing times over the past 10 days %u2013 with vessels now spending 51 hours on average outside the port, compared to 42 hours two weeks ago.
Our Correspondent24 April 2021 6:28 AM GMT

April 24, 2021: Major container gateways in Europe and Southeast Asia have started to experience congestion issues, with Rotterdam and Singapore facing the highest risk, following the six-day closure of the Suez Canal in late March 2021, said Everstream Analytics in a new report.

From March 23 to 30, the 400m-long container vessel Ever Given ran aground in the Suez Canal on its way from China to Rotterdam, Netherlands, disrupting maritime traffic in one of the world’s busiest waterways that led to more than 360 vessels waiting to pass through the canal for almost one week. On April 3, the last of these ships cleared the canal as authorities spent five days to clear up the backlog.

Despite the normalization of canal operations, shippers have been facing higher shipping rates and limited ocean capacity as well as growing congestion at container gateways in Europe and Asia as vessels.

Longer waiting times have so far primarily been reported at Port Said in Egypt and the Port of Haifa in Israel in the first two weeks of April, likely due to their geographic proximity to the Suez Canal.

Since last week, the first vessels stuck in the Suez Canal have been arriving in European and Southeast-Asian container ports. In Europe, the Port of Rotterdam was expected to have the greater number of vessel calls from ships arriving from the Suez Canal.

“Terminals in Rotterdam are likely to remain under the greatest pressure with the highest risk of congestion as ocean carriers are considering a strategy that involves offloading cargo at major hub ports, skipping subsequent port calls, and turning ships around early to return to Asian ports. This allows the container lines to move faster to reposition empty containers which have been held at European ports for longer than usual due to the Ever Given’s grounding and are therefore unavailable in Asia, thus benefitting from spot rates which are almost four times higher on the fronthaul from China to Europe than on the backhaul, reads the report.

Should congestion issues in Rotterdam worsen, carriers could opt to unload cargo at nearby ports such as Antwerp, Felixstowe, or Le Havre.

In Asia, the Port of Singapore, which is expected to receive the largest number of vessels calls on eastbound services, has also faced an uptick in vessel berthing times over the past 10 days – with vessels now spending 51 hours on average outside the port, compared to 42 hours two weeks ago.

Should congestion issues worsen in Singapore, carriers could opt to discharge cargo at alternative hubs nearby, increasing the risk of congestion at Port Klang or Tanjung Pelepas. The latter has already been facing average berthing delays of more than 2 days in the past weeks.

“Besides the increased risk of delays for import cargo into Europe and Asia, the Suez Canal closure will also have an impact on the availability of container equipment, notably 40-foot containers, at export hubs in China and Korea, which will likely decline from mid-April into the month of May,” it reads.

Among the ports most affected by the shortage are Shanghai, Ningbo, Qingdao, and Busan, leading to another spot rate increase on trans-Pacific and Asia-North Europe lanes. Maersk Line, the largest container line in the world, has already warned that it expects a temporary loss of up to 30 percent of its cargo capacity between Asia and Europe in the second quarter of the year due to the Suez Canal blockage.

However, as most container lines have opted to turn ships around faster than anticipated from Europe to Asia instead of waiting at potentially congested terminals, earlier recovery of schedules appears increasingly likely, and capacity and equipment issues on the Asia-North Europe trade route caused by the Suez Canal blockage should decrease by the end of May.