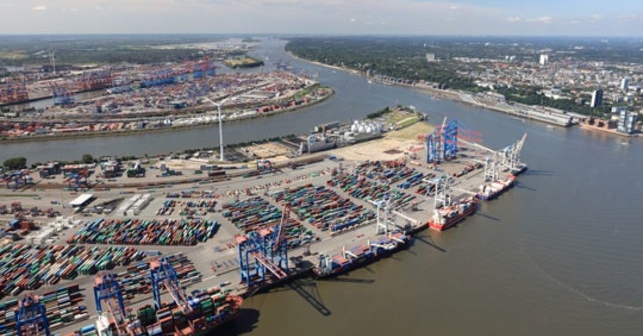 November 17, 2017: Comprising the general and bulk cargo segments, seaborne cargo handling in Hamburg during the first nine months stands at 104.3 million tonnes. At 6.8 million TEU, throughput of containerized general cargoes continued to grow; while at 34.1 million tonnes, bulk cargo throughput remained just below the previous year’s figure. The Port of Hamburg sees the CETA free trade agreement between European Union and Canada as providing an additional boost for seaborne trade that will benefit the Port of Hamburg.

“On container throughput, a total of 6.8 million TEU (up 0.4 percent) represented a renewal of slight growth. For loaded boxes, we achieved a 1.2 percent increase to 5.8 million TEU,” said Axel Mattern, joint CEO of Port of Hamburg Marketing. By contrast, handling of empty containers at 924,000 TEU was 4.3 percent lower than in the previous third quarter. Mattern mentioned the not yet implemented dredging of the Elbe fairway as one reason for the downturn in empty box handling. Market research by Port of Hamburg Marketing indicates that restrictions on the Elbe applying to Hamburg plus limited tidal ‘windows’ are causing shipping companies to use available slot space on their mega-containerships for loaded boxes as a matter of priority. Empty containers are increasingly being routed via other ports in Northern Europe, added Mattern.

“With the navigation channel adjusted, we could increase both container and bulk cargo throughput in Hamburg. We therefore continue to closely monitor the downturn in empty box handling. From the angle of value added, which on handling loaded boxes can be seen as higher for the port, our throughput of loaded boxes underlines Hamburg’s attractiveness as a Northern European hub port,” continued Mattern.

Once ratified by the parliaments of EU countries, the Comprehensive Economic and Trade Agreement (CETA) between the European Union and Canada that provisionally came into force on 21 September will simplify foreign trade. Customs dues will be scrapped on 98 percent of goods traded, and import and export restrictions will very largely be discarded. Alignment of industry standards through standard regulations for many goods will also make trading simpler. With trade volume put at around 64 billion euros, Canada is among the EU’s Top Ten trading partners.