May 28, 2018: The prime minister of India Shri Narendra Modi has recently laid the foundation stone for the development of Deoghar airport at Jharkhand. The ceremony took place in the presence of Droupadi Murmu, governor of Jharkhand; Raghubar Das 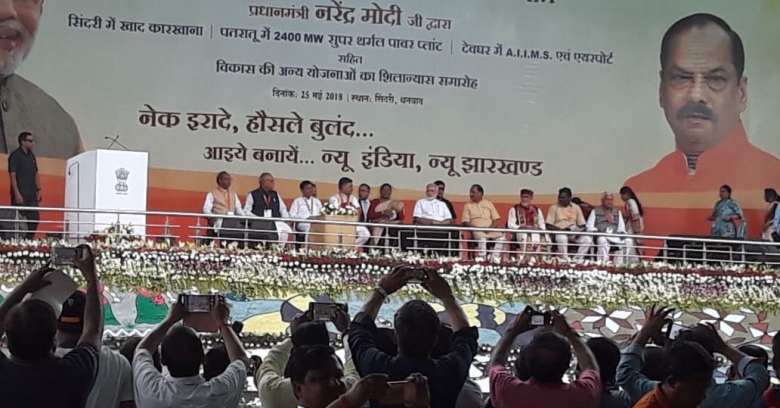 X
Narendra Modi, prime minister during the ceremony of Deoghar Airport with Droupadi Murmu, governor of Jharkhand, Raghubar Das, CM, Jharkhand and other guests
Our Correspondent28 May 2018 6:58 AM GMT

Deoghar Airport developed by the Airports Authority of India (AAI), in collaboration with Defence Research and Development Organization (DRDO) and the government of Jharkhand is at an estimated cost of Rs 401.32 crores. The new airport will spread across over 600 acres of land and its terminal building will be built in an area of 4000 square metre The terminal building, equipped with state-of-the-art passenger facilities will be a composite structure inspired by the shikharas of the Baidyanath Temple.

With a long runway of 2500 metre, the airport will be able to park two AB-320 type aircraft. The building will have six check-in counters and two arrival belts with peak hour handling capacity of 200 passengers. An efficient solid waste management system, reuse of treated water for horticulture and air-conditioning purposes, rain-water harvesting system to recharge groundwater, sewage treatment plant, solar power system, energy-efficient chillers and a green belt along the periphery of the airport are few other green features of the airport development project.

Deoghar is predominantly a religious tourist destination famous for Baba Baidyanath Dham, one of the 12 Jyotirlingas and one of the 51 Shaktipeeths of India. The airport development project will give an impetus to local tourism and will generate employment as large part of the local population depends on tourism for its livelihood. The development of Deoghar Airport would improve the overall economic development of the region.

In addition, under government of India’s regional connectivity scheme (RCS) - UDAN, more airports of Jharkhand like Bokaro, Dhalbhumgarh and Dumka are likely to be connected with air network, resulting in economic development of the state.