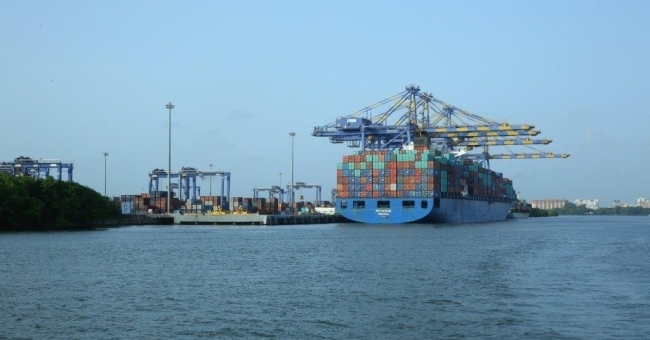 The new service offers direct connectivity from West Africa to Cochin Port and from Cochin Port to Far East Ports. The service started with the maiden call of vessel M.V. KMARIN AZUR on May 7, 2021.

“Inclusion of this service will boost cashew, raw cotton and timber trade from Kerala and Tamil Nadu. With this new service customers can connect their cargo directly from Cochin to global markets instead of transhipping at Colombo Port thereby, providing overall cost advantage by reducing the transit time by 7-10 days,” reads the DP World release.

The terminal has moved key rail consignments carrying over 260 MT of oxygen recently. It has also handled over 1000 oxygen cylinders which arrived by ship for distribution across Kerala.

The terminal has registered 48 percent YTD volume growth, surpassing overall South India growth of 23 percent for the same period. This has led to increase in Cochin Port ranking to number 2 among all South Indian Terminals. The Terminal achieved this growth by enhancing direct vessel connections and strengthening rail connectivity to hinterland markets. ICTT caters to a large number of customers across the vast hinterland including Coimbatore, Tirupur, Salem, Erode, Mysore located in the states of Tamil Nadu and Karnataka.

The terminal has witnessed 38 percent YTD growth in cargo coming from these states. ICTT also offers excellent rail connectivity to Bangalore thereby supporting customers to connect cargo directly to mainline vessels at shorter transit time. The terminal continues to be productive with an average Gross Crane Rate (GCR) of 30+ moves per hour, which is at par with global standards.