October 1, 2020: Lufthansa on Tuesday added its ninth Boeing 777F to its fleet. The freighter aircraft landed for the first time at Frankfurt Airport (FRA). 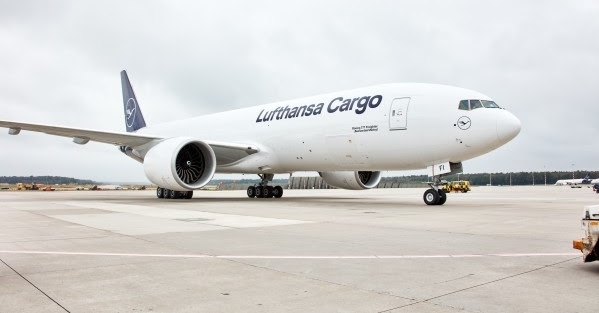 X
The twin-engine Boeing 777F is around 20 per cent more efficient and emits less carbon dioxide than the preceding MD-11F.
Our Correspondent1 Oct 2020 5:13 AM GMT

October 1, 2020: Lufthansa on Tuesday added its ninth Boeing 777F to its fleet when the freighter aircraft landed for the first time at Frankfurt Airport (FRA).

Lufthansa Cargo now operates nine modern Triple Seven at its home hub in Frankfurt. In addition, the company is marketing the cargo capacity of four more aircraft of this type, which is operated by the AeroLogic joint venture based at Leipzig Airport. A total of thirteen highly efficient Boeing 777Fs fly for the cargo crane's customers.

Peter Gerber, CEO and chairman of the executive board of Lufthansa Cargo, said, "Especially in acute crises, air cargo secures important supply routes and thus makes a fundamental contribution to the global economy. Mastering short-term global challenges are one of our core competencies, countering long-term global challenges is our responsibility. With our new fleet, we are underlining our claim to actively and sustainably combine economic and ecological efficiency."

The twin-engine Boeing 777F is around 20 per cent more efficient and emits less carbon dioxide than the preceding MD-11F. In addition, the new model meets the strict noise protection requirements of ICAO Annex 16, Volume I, Chapter 14. Due to the higher cargo capacity and range, the same freight performance can be achieved in the future with noticeably fewer aircraft movements.

The six MD-11 freighters yet in service will be phased out over the coming months, with the first half to be phased out within this year. Lufthansa Cargo first put the eye-catching MD-11F tri-jet into service in 1998 because of its efficiency advantages. It replaced the four-engine jumbo freighters until 2005.