The Port of Los Angeles and the Port of Long Beach will delay the Container Dwell Fee to December 6 after meetings with U.S. Port Envoy John Porcari, ocean liner companies and marine terminal operators. 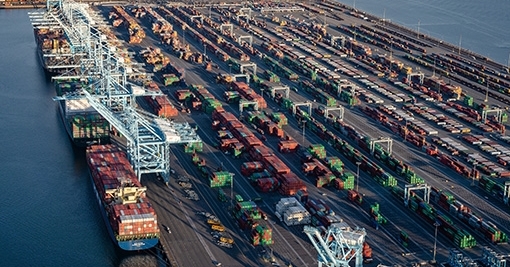 November 30, 2021: The Port of Los Angeles and the Port of Long Beach will delay the Container Dwell Fee to December 6 after meetings with U.S. Port Envoy John Porcari, ocean liner companies and marine terminal operators.

"Since the fee was announced on October 25, the twin ports have seen a combined decline of 37 percent in aging cargo on the docks. The executive directors of both ports will reassess fee implementation after another week of monitoring data," an official statement said.

"No date has been set to start the count with respect to container dwell time," the statement added.

The ports plan to charge ocean carriers in these two categories $100 per container, increasing in $100 increments per container per day until the container leaves the terminal.

"The incentive will be provided to the importers that pick up their containers via merchant haulage from all the terminals in Los Angeles and Long Beach in the first eight days with the intent that they will use it to offset costs incurred by tensions on their supply chains," an official CMA CGM statement said.

The incentive will be:

$100 per container for daytime pickup from Monday to Friday; and

$200 per container at night and on weekends.

“The CMA CGM Group is committed to doing everything we can to assist in improving overall supply chain velocity in southern California," said Ed Aldridge, president, CMA CGM and APL North America. "By incentivising the movement of containers off the terminals and ensuring pickups can be made on nights and weekends at FMS, we will decrease truck turn times and expedite the flow of goods into the United States. This is just one more way we are working with our port partners and the Biden-Harris Supply Chain Task Force to ensure shelves are full and Americans have access to the vital items they need on a daily basis.”

Dwell fee to be collected in Seattle terminal
SSA Marine has also announced the introduction of an Extended Dwell Time Fee for Terminals 18, 5 and 30 in Seattle, USA, according to this update from Hapag-Llyod.

"This fee is effective from December 1, 2021, and is levied on import containers that have exceeded 5 calendar days on the terminal," the Hapag statement added.

The schedule for the fee:

Earlier, terminals at the Port of Tacoma, Washington had decided to collect dwell fees from importers.