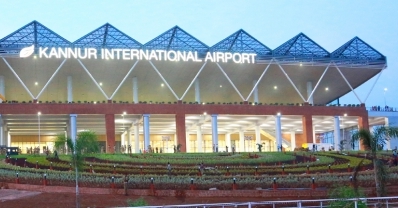 X
The airport is expected to facilitate the export of high-value handloom, coffee, fish, meat, spices, pharmaceuticals, flowers, etc. There are also a large number of processing units for dry fruits and spices in this region.
Libin Chacko Kurian22 Feb 2021 2:11 PM GMT

February 22, 2021: Kannur International Airport (KIAL) in Kerala recently opened its 1,200 sq mt cargo complex with an annual capacity of 12,000 metric tonnes and will soon have the 6,000 sq mt international cargo terminal ready. It is now aiming to become the air cargo hub for the region by exporting goods to the Gulf region and even to the United States by beating other airports with its advantages.

Being the fourth international airport of Kerala, it has Calicut International Airport just 120 kms south of it and Mangalore International Airport 170 kms north of it. However, the ability of KIAL to handle much bigger aircraft due to its runway length and connectivity to industries, businesses and plantations in the North Malabar and South Karnataka makes it an ideal candidate to become the cargo gateway of the region to the world.

The runway of KIAL is 3,050 metre and is significantly longer than the other two airports. This means the airport can handle much bigger Code-E aircraft like B777, B747 andA330. The airport also plans to increase the runway length to 4000 metres, thus becoming one of the biggest in India. Even though all three are tabletop airports, the runway length gives an edge to Kannur Airport.

Cargo Service Center has been appointed as the agency to operate and manage the terminal. Tushar Jani, chairman of CSC Group noted it as the ‘most promising new airport’. “From the enquires, we could see that both our customers and international airlines are just waiting for the cargo operations to start and permissions to come in,” he added

With 32.8 percent share in the airport, the government of Kerala along with its NRI community is spearheading the development.

“The density of the NRI population around Kannur airport is highest among all airports in Kerala which is a great opportunity. Also, it is one of the technically advanced Airport with better connectivity in the region and has many advantages above all other airports in the region,” said Jani.

Once fully functional, Kannur International Airport is expected to become the cargo hub of the region. It will also serve the export opportunities arising from the proximity to South Karnataka. Kodagu, located just 82 km away from the airport, has a large number of coffee and tea plantations, frequently exported produces.

Regarding how Kannur can become a centre for import-export and air cargo operations, a 2019 Kerala government brochure reads, “The airport will facilitate the export of high-value handloom, coffee, fish, meat, spices, pharmaceuticals, flowers, etc. There are a large number of processing units for dry fruits and spices, apart from export opportunities related to marine and fishery products.”

Devdasan, secretary, Kerala Chamber of Commerce and Industry (KCCI), said, “The business through KIAL will depend on the airlines coming to the airport and within three weeks we will get an idea about it. Kannur is in proximity to the southern district of Karnataka Kodagu, a place famous for its coffee and pepper plantations. Along with this even the fruits and vegetables cultivated in this place could also come to Kannur as Mangalore is far away even though the connectivity is good. Export commodities from districts like Kannur, Kasargod and Malapuram and Wayanad will also come to this airport. This will also include the fisheries as it just 20-22 kms away from the seashore.”

Jani said, “Kannur International Airport is going to help the northern district of Kerala in their export and import both domestically and internationally. This is an opportunity for us to serve the cargo community there as we believe that this airport will do very well in a short time span. We are expecting to handle marine products, vegetables and textiles which will mainly go to the gulf while some of them will go to the United States as well.”