November 25, 2019: JSW Infrastructure today announced the commissioning of its new iron ore terminal at Paradip Port in Odisha that can load at a rate of one lakh tonnes per day. 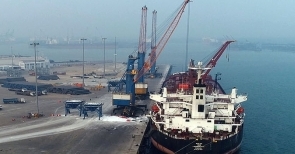 X
The new iron ore terminal comprises two ship-loaders, each with a capacity of 7,000 metric tonnes per hour.
Our Correspondent25 Nov 2019 12:03 PM GMT

November 25, 2019: JSW Infrastructure today announced the commissioning of its new iron ore terminal at Paradip Port in Odisha that can load at a rate of one lakh tonnes per day.

The capacity of 18 million tonnes per annum (MTPA) of the 370-meters-long terminal is claimed to be the fastest turnaround in India.

“The high load rate is expected to significantly reduce the pre-berthing delays at Paradip as well as allow incremental cargo flow for the Port which is all set to be the largest port in the country. The company has invested approximately Rs 750 crore to establish the new terminal at Paradip,” said the release.

Paradip Port is a natural, deep-water port on the East coast of India in Jagatsinghpur district of Odisha. The port is administered by the Paradip Port Trust (PPT) is situated at the confluence of the Mahanadi river and the Bay of Bengal. It is situated 210 nautical miles south of Kolkata and 260 nautical miles north of Visakhapatnam.

JSW Infrastructure is one of the leading private sector infrastructure companies in India and part of US$ 14 billion JSW Group. The company now aims to expand its cargo handling capacity to 200 million tonnes per annum by 2021 through greenfield and brownfield expansions.

“Paradip continue to remain attractive for Iron ore movement through the sea. With the commissioning of this terminal, India can now offer Capesize shipments. The capacities are far better than not only any other Indian port but also many ports internationally. The most modern, fully mechanized & environment-friendly terminal will enable minimal handling loss for our customers with faster turnaround. This will help boost the competitiveness of customers as well as Paradip Port. This terminal is part of our broader strategy to achieve 200 MTPA cargo handling capacities in the next three years. We will achieve our capacity target through a mix of greenfield and brownfield expansions,” said Arun Maheshwari, Joint MD & CEO of JSW Infrastructure

Ashwini Kumar Vaishnaw, MD, Brahmani River Pellets Limited, said, “We are delighted to be the first shipper to sail out the vessel MV IC Phoenix from JSW terminal, Paradip. The state-of-the-art terminal will increase the operational efficiency and effectiveness of the port and prove to be very rewarding for all the stakeholders. JSW terminal will play a major role in the economy of India, by reducing the overall cost and making us more competitive in the international market. We see the history in making that Paradip port will be one of the best and preferred port for exports and coastal movements in India.”