November 29, 2017: The cargo divisions of the Air France-KLM and Jet Airways have joined forces to further strengthen their existing cargo cooperation. 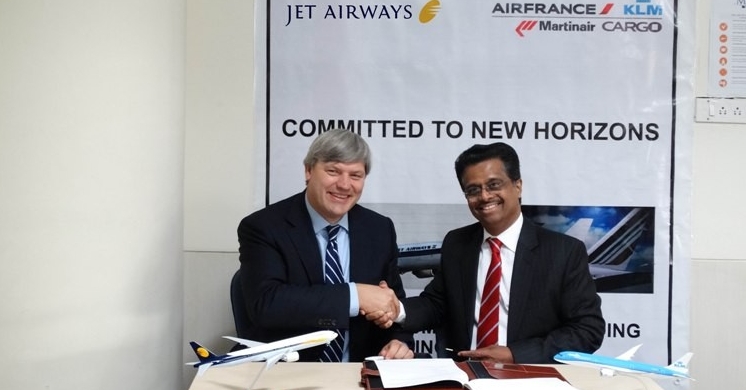 November 29, 2017: The cargo divisions of the Air France-KLM and Jet Airways have joined forces to further strengthen their existing cargo cooperation.

Part of the larger "enhanced cooperation agreement", the Memorandum of Understanding (MoU) signed today in Mumbai, proposes to deepen the cooperation between the partners, who will endeavour to link and leverage their respective route networks. This will enable them to create and offer expanded high-value cargo services, as well as new and innovative products tailored towards the needs of specific industries such as pharmaceuticals, express and e-commerce, both in India (Mumbai and Delhi) and in France (Paris-Charles de Gaulle) and The Netherlands (Amsterdam Schiphol).

“We share the ambition to jointly explore and exploit the vast opportunities in the air cargo market via mutual synergies in the areas comprising our routes and networks, as well as warehousing amongst others. We also intend to work closely to co-create new and industry-leading products and services for our clients," said Pradeep Kumar, Senior Vice President, Jet Airways Cargo, elaborating the details of the partnership.

In an earlier interview to The STAT Trade Times, Kumar, who joined Jet less than two years ago from Emirates SkyCargo, elaborated a series of steps that the cargo division of the carrier is implementing to increase revenue, optimise capacity and improve yields. According to him, with the introduction of wide-body aircraft in the domestic network connecting key metros, Jet Airways has significantly increased the available cargo capacity.

“Till about a year ago our strength was on the seamless domestics connectivity but things began to change with the induction of wide-body aircraft to international locations starting with Dubai in August last year followed by other Gulf destinations and Amsterdam. Supplementing this was the introduction of wide-body aircraft in the domestic sector connecting Delhi, Mumbai, Chennai and Bangalore. This was truly a game changer in the domestic aviation sector and cargo had a significant gain on account of this,” said Kumar.

From the cargo point of view, such a move allowed capacity to grow by 10 percent and most importantly FTK (Freight Tonne Kilometre) by 15 percent compared to the previous year. According to Kumar, Jet flights for Europe and Middle East destinations are able to carry 22 to 23 tonnes of cargo and they manage to fill that capacity every time.

“Our growth was rapid from a strong domestic distribution point to point to a network selling capability connecting domestic network with global cargo hubs,” said Kumar.

For the financial year 2017, according to the numbers made public, the cargo division contributed Rs 1337.68 crore, which is 6.31 percent of the total sales. Jet made a consolidated profit of Rs 438 crore in the financial year.

With the aim of eventually creating an integrated commercial and operational cargo cooperation model between India and Europe, the partners will work through several steps that will comprise synergising their respective cargo networks, bringing in efficiencies in warehousing, exchanging capacities and making blocked space arrangements.

Jet Airways Cargo and Air France KLM Cargo will also collaborate to optimise and expand volumes from emerging Indian markets such as Bengaluru and Chennai where intercontinental connectivity by direct services has recently been enabled.

"With the dynamic developments in India, we are excited to offer new opportunities to our customers and strengthen our global network towards the Indian freight market," said Marcel de Nooijer, EVP Air France KLM Cargo.

On the question of starting freighter operations out of India, Pieter Elbers, CEO of KLM, said that he does not rule out the possibility as India offers huge opportunities for freight transport. "We will evaluate it as we go along and certainly it is a possibility," Elbers told The STAT Trade Times on the sidelines of the press conference in Mumbai.