Drewry lists out 4 potential disruptions for shippers in 2022; freight rates seen higher by 20-100% 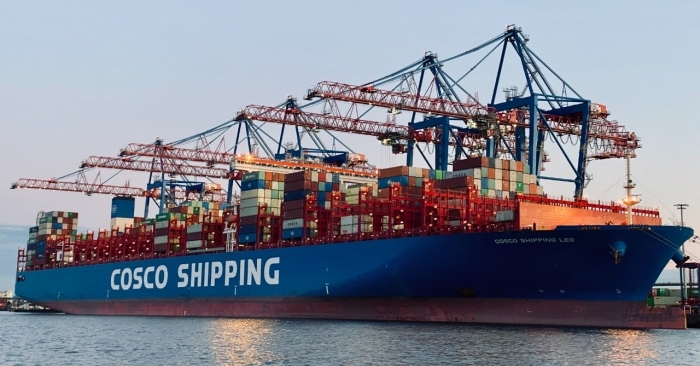 Looking ahead to 2022, should shippers prepare for a new round of disruptions, asks Drewry Shipping, an independent maritime research and consulting services provider, and goes on to identify four potential, new disruptions and "provide guidance on what are likely to be priority issues shippers should consider and prepare for in 2022." 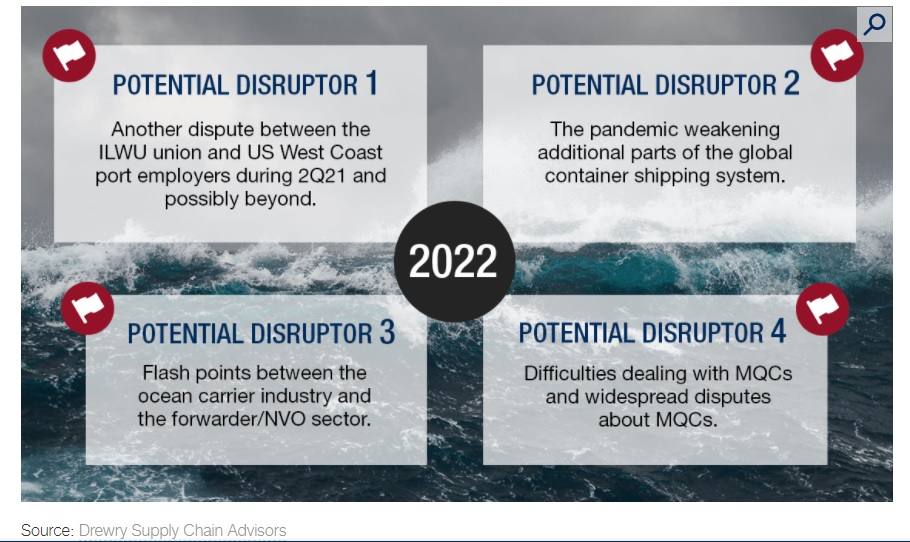 Another dispute between ILWU union and US West Coast port employers
"This will push back by weeks or even months the reduction of acute congestion at US West Coast ports with ripple effects on global carriers’ schedules and on the ability of ports in Asia to handle unscheduled ships or bunched ships affected by problems in the US. For BCOs with long memories of earlier disputes, now is the time to look at alternative routes to avoid US West Coast ports."

Pandemic weakening some parts of global container shipping system
"China’s current zero tolerance Covid policy makes it particularly likely to shut down, and without prior warning, more/secondary ports, more barge operations and more feeder operations as new cases arise. Further lockdown measures in other countries, triggered by new Covid variants or pandemic waves also cannot be ruled out. We fear the prospect of more dislocations / lack of coordinated asset deployment between ocean carriers and rail carriers in the US, in particular. Seafarer shortages and travel restrictions may worsen with any surge in cases, which will further limit the number of sailings shipping companies are able to make to meet demand."

Flash points between carriers and forwarder/NVO sector
"We are starting to see that some ocean carriers are withdrawing from NVOCC relationships and others are making it difficult for NVOs to offer carrier-like fixed contract rates to shippers under preferential “named account” terms agreed in advance with the ocean carriers. The role and the pricing strategy of the NVOCC have shifted since the start of the pandemic with many now offering shorter term and varying premium rate levels in return for finding space and equipment solutions. Medium and small NVOs may find themselves excluded from BCOs’ large annual ocean tenders."

“More beneficial cargo owners (BCOs) - even the largest ones - will have to accept the new reality of the market: you cannot expect to ship 10 containers one week, 50 containers the next week, and hope to get 100% capacity for both weekly volumes. Carriers and NVOs are already telling BCOs that their capacity in 2022 will be the contractual Minimum Quantity Commitment (MQC) per annum “divided by 52”. Whilst capacity constraints have been a common theme for 2021, we see the additional constraint that full or high payment of the freight will be due when the capacity is not used by the shipper for 2022. Drewry believes that the majority of BCOs are not organised to manage this type of volume commitment. Disputes will spread in 2022 about how to deal with excess volume above weekly MQC and deficit volume below weekly MQC and about associated penalty clauses."

Drewry has suggested the following procedures to tackle the challenges likely in 2022:

Freight rates may go up
Early term contract discussion ranges for 2022-23 have risen significantly in the containers market, S&P Global Platts said in an update.

While shippers are hoping that spot rates would cool off in the coming year, "early negotiations for the upcoming contract season, starting April, point to an unrelenting bullishness as the discussed price range is sharply higher than the current year by between 20 percent and 100 percent."

The update quoted Rakesh Pandit, co-founder and CEO, CONBOX Logistics Private Limited (India), as saying: "The focus of some carriers will be on long-term contracts like Maersk is very open about it, they want to offer maximum volumes to the BCOs and long-term contracts but Hapag-Lloyd tells customers to go to spot markets. So, it depends on the carrier; Maersk is very reluctant to offer spot bookings."

The carriers may push for "tiered pricing" wherein any volumes over the contract allocation are priced at a higher level based on a percentage or dollar value.

Some shipping lines are bullish on implementing General Rate Increases of as much as $3,000/FEU from December 15 on the basis that demand for restocking inventory at U.S retailers ahead of Lunar New Year in February, would exceed the supply of carrying capacity and equipment, S&P Global Platts had said in an earlier update.

"But pushback is expected from shippers that are not facing deadlines as tight as those in the approach to the holiday shopping season. Demand is still exceeding supply. It doesn't help that Seattle and Vancouver are overloaded with containers at the same time as Los Angeles and Long Beach are facing severe congestion," the report said.

The number of ships in the queue to berth at the Los Angeles/Long Beach port complex reached an all-time high of 101 on Monday, December 13 according to the Marine Exchange of Southern California.

The S & P report said: "The flow of US import cargoes has yet to subside even with the window to stock stores for holiday shopping season already past."