In 2020, the Port of Rotterdam moved 436.8 million tonnes of cargo through its 42 kilometres waterway in the Netherlands. To make it a ‘smart port’, the port authority is working with Awake.AI for digital twin. Once completed, decisions will be based on data, less emission, less use of space, less time, and fewer people. 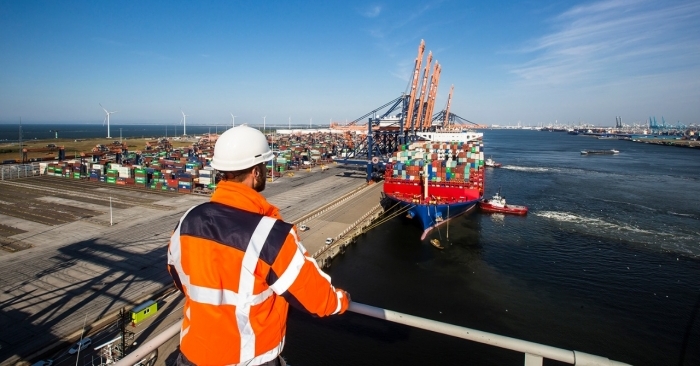 X
When Ever Given was refloated from Suez Canal after a week, the Port of Rotterdam Authority initiated proactive consultation with stakeholders to determine how to handle the forecast surge in incoming vessels as smoothly as possible.
Shalini Nair25 May 2021 6:08 AM GMT

In 2020, the Port of Rotterdam moved 436.8 million tonnes of cargo through its 42 kilometres waterway in the Netherlands. To make it a ‘smart port’, the port authority is working with Awake.AI for digital twin. Once completed, decisions will be based on data, less emission, less use of space, less time, and fewer people.

To guarantee the smooth handling of cargo from the ships, it is important to keep capacity utilisation at the terminals at a manageable level. Since the ports expect an exceptionally high influx of vessels and freight during a certain crisis, it is important to work towards swift circulation, as well as an optimal balance between import and export flows.

When Ever Given was refloated from Suez Canal almost after a week, the Port of Rotterdam Authority has initiated proactive consultation with the relevant stakeholders (shipping companies, terminal operators, inland terminals, hinterland carriers) to determine how to handle the forecast surge in incoming vessels as smoothly as possible.

When Ever Given was refloated from Suez Canal after a week, the Port of Rotterdam Authority initiated proactive consultation with stakeholders to determine how to handle the forecast surge in incoming vessels as smoothly as possible.

Emile Hoogsteden, vice president containers, breakbulk and logistics, states, “Since the terminals won’t be able to help everyone at the same time, we are also called on all parties in the logistics chain to check whether they have any opportunities to adapt their processes in the interim. In addition, these parties are urged to exchange data in a timely, complete and correct manner, allowing other partners in the chain to proactively anticipate changes as they develop. For example, while deep-sea terminals operate 24x7, many container recipients have different business hours, but this does not apply to the opening hours of many container receivers. That is why we call upon the market parties to consider actions that stimulate night distribution and trucking activities during the night.”

In 2020, the Port of Rotterdam moved 436.8 million tonnes of cargo through its 42 kilometres waterway in the Netherlands. Approximately 30,000 ocean-going vessels and 100,000 inland vessels call on the port per annum. Providing direct and indirect employment to some 385,000 people and representing 6.2 percent of the Netherlands’ gross national product (GNP).

After an unprecedented pandemic and ocean shipments facing a tough time last year, the Suez Canal blockage once again pushed certain freight forwarders to urge their customers to move into air freight. Speaking on how ports position themselves to save their clients from moving into different modes of transport, Hoogsteden, says, “Maritime transport accounts for 90 percent of all freight traffic. Moving this kind of volumes to airfreight or rail is and will not be a viable option because there won’t be sufficient capacity. There are certain types of goods that have sufficient margin to be transported by air (pharmaceuticals or high-tech goods for example). Most cargo flows cannot bear those higher costs for transportation.”

The port authority is investing in infrastructure (whether physical or digital) to make sure that it can accommodate trade now and in the future. It believes that Asia is and will remain Northwestern Europe’s strongest trading partner. Although its market share on the import side is stronger than on the export side, Rotterdam has a good position for both import and export flows, due to the high number of the first port of call and last port of call.

To make it a ‘smart port’, the port authority is working with Awake.AI for digital twin. Once completed, decisions will be based on data, less emission, less use of space, less time, and fewer people. In addition to the analogue infrastructure, there is now a digital dimension - the basis consists of a digital map of the port. It includes what are the access routes, which berths are available, in what sizes, and which conditions are needed for the berthing of which vessels. This immediately delivers efficiency for the handling of shipping and therefore value for a port authority.

In the Harbour Master's Division, the harbour master receives reports on approximately 230,000 port calls a year. Until recently, those reports were made by email and telephone. These days, 80 percent of them are processed automatically because the data is right. With a smart port infrastructure, the port has a much clearer picture of the actual condition of its assets. Maintenance becomes more predictable, easier, more sustainable and more affordable. The three examples are:

smart dredging: The port of Rotterdam has grown and developed over time. Maintenance is based on past agreements, even though the port may now be used differently. In the current situation, a digital chart shows the vessels, what their draught is and which channels are available. AIS data is used here, visualising the parts of the waterways that are in use, as well as which sections are not being used or not being used to their full depth. We can use that information to decide where dredging is needed. That cuts costs and reduces carbon emissions.

smart bollard: Until now, the port has not been possible to measure mooring line forces. In the absence of exact measurement data for moored vessels, the design approach is to assume the maximum load of vessels on mooring lines and bollards. Together with the company Straatman B.V., the Port Authority recently installed the first smart bollard to learn more about the actual forces exerted when ships are being moored. Not only does this mean that safety can be monitored in real-time, but it also helps to know which vessels can be berthed at which quay and where.

smart quay walls: Many quay walls in Rotterdam are now 50 years old or more. They have reached the end of their technical lifespan. Data from sensors allow it to see whether they can be used for longer. In addition, it puts the port in a better position to demonstrate that the quay walls could accommodate bigger vessels or work with bigger cranes. The post can also see when a client may not be making the most of the available capacity.

The Amazonehaven (where the deepsea container terminals are located) is one example. The possible replacement of the quay would have cost between €350 and €500 million. Based on data from sensors in the quay, Rotterdam was able to redesign the current quay walls, making replacement unnecessary. In that way, it was able to cut costs, reduce disruption/investment for the clients and cut emissions while making it possible to accommodate larger vessels and get more cargo offloaded.

On April 5, 2021, the Port of Authority started on a new trial with mixed mooring for inland vessels carrying dangerous cargo. These ‘cone ships’ – named after the one or two blue cones specifying the cargo’s hazard category will be allowed to moor side by side or next to vessels that are not carrying dangerous cargo. Through this experiment, the Port Authority plans to gain experience in this area. The trial was set up in anticipation of the new national policy guideline regarding mixed mooring that will shortly be issued by the ministry of infrastructure and water management and the planned adaptations to the Inland Waterways Police Regulations, BPR.

The Port Authority supports the Transhydrogen Alliance consortium, particularly in setting up an import terminal in Rotterdam for the new supply chains on production and import of green hydrogen and green ammonia to Europe via Rotterdam.

Last year, Shell announced its plans to take a green hydrogen plant into operation as early as 2023 to be constructed in Maasvlakte 2. From here, the produced hydrogen will be transported via a pipeline to Shell’s refinery in Pernis. Gasunie and the Port of Rotterdam Authority intend to realise the new pipeline in a joint venture. Meanwhile, Uniper and the Port Authority are investigating the possibilities of large-scale production of green hydrogen at the Maasvlakte area. The ambition is to realise a hydrogen plant on the site of Uniper by 2025 with a capacity of 100MW and to expand this capacity to 500MW.

Sixteen parties are working within Project H-Vision largely from the Rotterdam port industrial area on a feasibility study into the production and use of blue hydrogen in the Rotterdam port area. The Port Authority is affiliated as a partner with H-Vision. H-Vision aims to provide the industry with low-CO₂ energy before 2030, particularly by replacing natural gas with blue hydrogen and possibly also using residual gases. The Port Authority is working with the port business community and the government to create a future-proof port, a port where businesses can flourish both now and in the future, and provide income and jobs. The aim is to do all this while minimising the impact on the climate and nature.

“We are working towards achieving a carbon-neutral and circular port in three steps -efficiency & infrastructure, transitioning to a new energy system, and new raw materials and fuel system,” observes Hoogsteden.

The Port of Corpus Christi, the United States' largest energy export gateway, and the Port of Rotterdam have entered into a memorandum of understanding (MoU) that will allow the two global entities to collaboratively improve their global maritime operations. The two ports have outlined several shared objectives, which include co-developing trade and commercial opportunities, fostering an exchange of information, and advancing the development and deployment of innovative technologies specifically related to navigational safety and environmental protection.

This story was originally published in Indian Transport & Logistics News' May - June 2021 issue.