February 22, 2020: The International Air Transport Association (IATA) released its initial assessment of the impact of the Novel Coronavirus 2019 outbreak (COVID-19) on Thursday which predicted a $27.8 billion revenue loss in 2020 for carriers in the Asia-Pacific region. 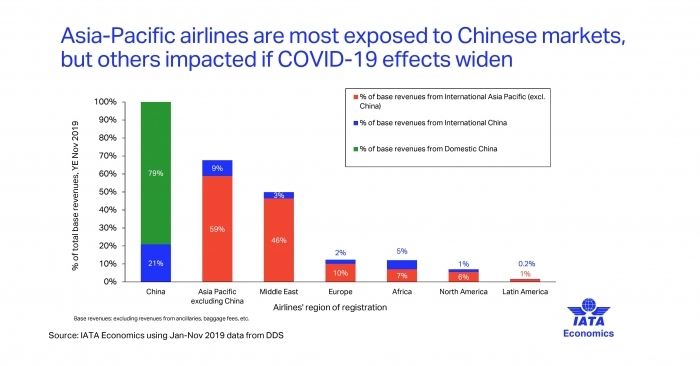 X
The bulk of which would be borne by carriers registered in China, with $12.8 billion loss in the China domestic market alone.
Our Correspondent22 Feb 2020 7:39 AM GMT

February 22, 2020: The International Air Transport Association (IATA) released its initial assessment of the impact of the Novel Coronavirus 2019 outbreak (COVID-19) on Thursday which predicted a $27.8 billion revenue loss in 2020 for carriers in the Asia-Pacific region.

The bulk of which would be borne by carriers registered in China, with $12.8 billion loss in the China domestic market alone. Considering that growth for the region’s airlines was forecasted to be 4.8%, the net impact will be an 8.2% full-year contraction compared to 2019 demand levels and has a potential of 13% full-year loss of passenger demand for carriers in the Asia-Pacific region.

Carriers outside Asia-Pacific
In the same scenario, carriers outside Asia-Pacific are forecast to bear a revenue loss of $1.5 billion, assuming the loss of demand is limited to markets linked to China. This would bring total global lost revenue to $29.3 billion (5% lower passenger revenues compared to what IATA forecast in December) and represent a 4.7% hit to global demand. In December, IATA forecast global RPK growth of 4.1%, so this loss would more than eliminate expected growth this year, resulting in a 0.6% global contraction in passenger demand for 2020.

Compare with SARS outbreak of 2003
These estimates are based on a scenario where COVID-19 has a similar V-shaped impact on demand as was experienced during SARS. That was characterized by a six-month period with a sharp decline followed by an equally quick recovery. In 2003, SARS was responsible for the 5.1% fall in the RPKs carried by Asia-Pacific airlines.

The estimated impact of the COVID-19 outbreak also assumes that the centre of the public health emergency remains in China. If it spreads more widely to Asia-Pacific markets then impacts on airlines from other regions would be larger.
It is premature to estimate what this revenue loss will mean for global profitability. We don’t yet know exactly how the outbreak will develop and whether it will follow the same profile as SARS or not. Governments will use fiscal and monetary policy to try to offset the adverse economic impacts. Some relief may be seen in lower fuel prices for some airlines, depending on how fuel costs have been hedged.

“These are challenging times for the global air transport industry. Stopping the spread of the virus is the top priority. Airlines are following the guidance of the World Health Organization (WHO) and other public health authorities to keep passengers safe, the world connected, and the virus contained. The sharp downturn in demand as a result of COVID-19 will have a financial impact on airlines—severe for those particularly exposed to the China market. We estimate that global traffic will be reduced by 4.7% by the virus, which could more than offset the growth we previously forecast and cause the first overall decline in demand since the Global Financial Crisis of 2008-09.

And that scenario would translate into lost passenger revenues of $29.3 billion. Airlines are making difficult decisions to cut capacity and in some cases routes. Lower fuel costs will help offset some of the lost revenue. This will be a very tough year for airlines,” said Alexandre de Juniac, IATA’s Director General and CEO.

Role of Governments
Governments have an important role to play in this crisis:
• Operations: Airlines have developed standards and best practices linked to the International Health Regulations (IHR) to manage effectively and efficiently in times of public health emergencies. Airlines, therefore, depend on governments to also follow the IHR so we have an effective global approach to containing the outbreak. “We have learned a lot from previous outbreaks. And that is reflected in the IHR. Governments need to follow it consistently,” said de Juniac.
• Leadership: It is also important for governments to take leadership in shoring up their economies. The Singapore government, for example, is allocating SGD 112 million to provide financial relief to airlines and the aviation sector struggling to economically maintain connectivity. “Airlines and governments are in this together. We have a public health emergency, and we must try everything to keep it from becoming an economic crisis. Relief on airport costs will help maintain vital air connectivity. Other governments should take good note and act quickly,” said de Juniac.

Advice to Travellers
The WHO has not called for restrictions on travel or trade. Indeed, air transport plays a major role—bringing medical staff and supplies to where they are needed.
WHO has published extensive advice to travellers on its website. Passengers should be reassured that cabin air is filtered, that aircraft are cleaned in line with global standards, that key airports have implemented temperature screening for travellers and that airline staff and crew are trained to deal with the rare case of a passenger presenting with symptoms of infection.
“If you are sick, don’t travel. If you have flu-like symptoms, wear a mask and see a doctor. And when you travel wash your hands frequently and don’t touch your face. Observing these simple measures should keep flying safely for all,” said Dr David Powell, IATA’s Medical Advisor.