March 6, 2020: The coronavirus outbreak in China has not spared India’s cotton yarn exports either and has started exerting pressure on yarn realisations, which have corrected by 2-3 percent since the beginning of February 2020.

X
The domestic cotton spinning industry is highly dependent on exports, particularly to China.
Our Correspondent6 March 2020 9:51 AM GMT

March 6, 2020: The coronavirus outbreak in China has not spared India’s cotton yarn exports either and has started exerting pressure on yarn realisations, which have corrected by 2-3 percent since the beginning of February 2020.

The domestic cotton spinning industry is highly dependent on exports, particularly to China, with 30 percent of the cotton yarn produced in the country being exported, and China accounting for nearly one-third of the exports in recent years.

This follows a brief recovery seen in India’s cotton yarn exports in the month of January 2020 when the exports touched an estimated 100 million kgs, in line with India’s historical monthly average, following a weak performance for nine consecutive months earlier.

The outbreak of the coronavirus in China and the consequent lockout in parts of China has resulted in a shutdown of production units in the country, trickling down to lower demand for the yarn. The resultant correction in realisations, even as cotton prices have remained relatively stable on the back of scaled- up market interventions by the Cotton Corporation of India Limited (CCI), are expected to contract spinners’ contribution margins again, vis-a-vis the previous three months. Movement in domestic cotton prices contrasts with the international trend wherein uncertainties on demand have resulted in a sharper correction in cotton fibre prices in recent weeks.

Jayanta Roy, senior vice-president and group head, Corporate Sector Ratings, ICRA, said, “Even though domestic cotton fibre prices continue to be competitive vis-a-vis international cotton prices at present with a price spread of 4 percent (reduced from 9 percent in Feb-20), a further correction in international cotton prices amid demand-side uncertainties could render domestic spinners uncompetitive in the international markets, similar to the situation which was witnessed in H1 FY2020.” 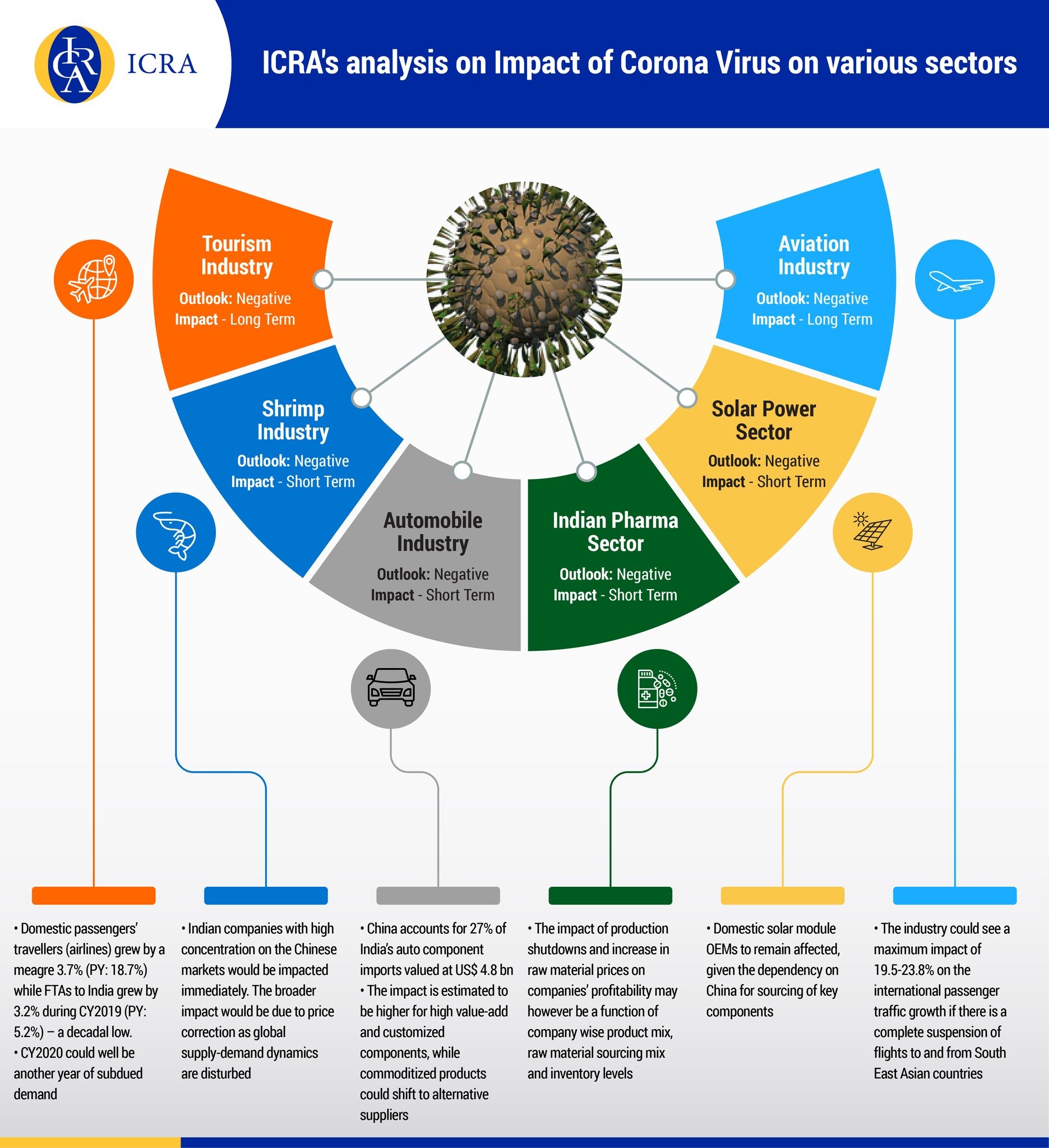 As for the performance of the Indian cotton spinning industry, it has already been severely constrained in the current fiscal amid multiple headwinds including a demand slowdown in the domestic as well as export markets and unfavourable raw material prices. While the industry was pinning hopes on a gradual recovery in cotton yarn exports from Q4 FY2020 onwards, aided by the softening of domestic cotton prices, the recent developments could prolong tough times for the domestic spinners.

“With no meaningful recovery in sight and continued uncertainty on the extent and duration of the impact of the coronavirus outbreak, ICRA is maintaining the ‘Negative’ outlook on the cotton spinning sector assigned in August 2019. There has been a visible weakening in credit profile of domestic cotton spinners in the current fiscal, corroborated by a credit ratio (upgrade to downgrade) of 0.6 times in YTD FY2020,” Roy added.

The impact on contribution margins over the next few months could be lower for companies that have built-up adequate cotton reserves at low prices in the recent months, have a wider geographical presence in markets

other than China and a focus on non-commodity, value-added products. Having said that, as per ICRA estimates, operating profitability for the domestic spinning sector in FY2020 is expected at multi-year lows, closer to the level last witnessed in FY2012, when most players suffered sizeable losses on inventory due to a steep unexpected correction in cotton prices.

In contrast to the spinning segment, other segments of the domestic textile value chain are not highly dependent on China and other affected regions, for export demand. Nevertheless, some impact on production could be seen in segments such as fabric and apparels that are dependent on these affected regions for getting raw material supplies such as man-made fibres/ yarns, colours and dyes, chemicals and trims/ accessories such as zippers, buttons and needles. Besides potentially affecting production for companies that do not maintain sizeable inventories, this could exert cost-side pressures with companies having limited flexibility to pass-on increases, amid a subdued demand scenario.

Having said that, the downstream segments, particularly apparels could, in fact, benefit from the increased demand in the export market over the medium to long term, as large customers look at geographically diversifying their supply base. No immediate benefit is, however, expected to owe to the time required to scale up capacities and get approvals, as well as liquidity crunch which the sector is currently experiencing amid delays in clearance of export incentives.