Bad weather, bad stowage, improper supervision and handling, and most importantly undeclared dangerous goods cargo are some of the key reasons why containers are lost at sea during voyages and accidents. Like the recent ZIM Kingston fire where two damaged containers on board caught fire following the collapse and loss of several containers earlier 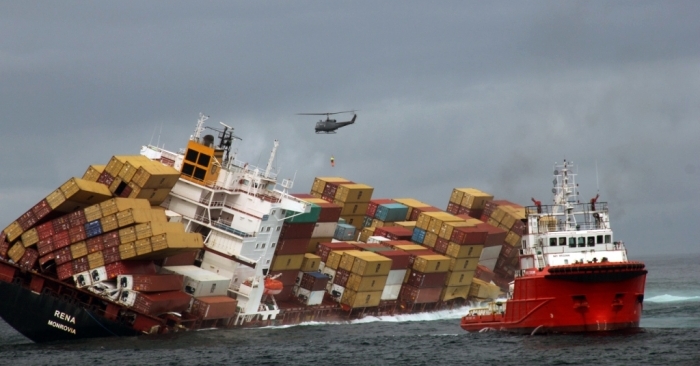 November 19, 2021: Bad weather, bad stowage, improper supervision and handling, and most importantly undeclared dangerous goods cargo are some of the key reasons why containers are lost at sea during voyages and accidents. Like the recent ZIM Kingston fire where two damaged containers on board caught fire following the collapse and loss of several containers earlier that day due to extreme weather.

Reports said the fire on ZIM Kingston was triggered by a hazardous material identified as potassium amyl xanthate, a compound used in the mining industry.

DANAOS Shipping Company, managers of ZIM Kingston, reported on November 16 that plans submitted to authorities regarding the unloading of cargo have been approved and they are now waiting for instructions as to which port they will be moving to.

"Cleanup crews have been working since the beginning of the incident but weather has impacted those operations at times with high wind and swells. Safety is our first priority and at times cleanup operations have been halted but progress is being made," the statement said.

There are no further signs of the missing containers and they are presumed to have sunk, it added. "Their contents included a multitude of common household items. Two of the containers contained potassium amyl xanthate and thiourea dioxide, used in mining. Those products are water soluble, biodegradable and would break down in water."

DANAOS is working with local authorities for possibly locating the missing containers, the statement added.

Larger vessels, larger exposures
Ships have become ever-larger as shipping companies seek economies of scale and fuel efficiency. The largest container ships break the 20,000 TEU mark with vessels over 24,000 TEU on order, and capacity of container ships has increased by 1,500% over 50 years and has more than doubled over the past 15 years, according to a study by marine insurer Allianz Global Corporate & Speciality. The world’s largest container ship currently, the Ever Ace, has a capacity of 23,992 containers.

The number of fires/explosions resulting in total losses increased in 2020, hitting a four-year high of 10, the study added.

The blocking of the Suez Canal by the Ever Given container ship in March 2021 is the latest in a growing list of incidents involving large vessels or mega-ships.

Loss of containers at sea also spiked last year (over 3,000) and continued at a high level in 2021, disrupting supply chains and posing a potential pollution and navigation risk.

"The number lost is the worst in seven years. Larger vessels, more extreme weather, a surge in freight rates and mis-declared cargo weights (leading to container stack collapse), as well as the surge in demand for consumer goods may all be contributing to this increase. There are growing questions about how containers are secured on board ships,” the report said.

Estimates put 10 percent containers on-board ships as declared dangerous cargo goods. “There is indeed an industry rule-of-thumb that 10 percent of cargo is declared DG but the key question always is what level of non/misdeclaration is common,” said Peregrine Storrs-Fox, risk management director, TT Club, a leading provider of insurance and related risk management services to transport and logistics industry. “Anecdotally, on the basis of information from cargo screening initiatives, it is likely that the industry encounters a further 5 percent of loadings that are misdeclared. The degree of dishonesty and criminality ranges from simple error through ‘chicken shippers’ (info available somewhere but not properly declared) to out and out fraud.”

Since ship fires apparently occur on a weekly basis, mostly successfully extinguished by ships’ crew, and many of these relate to cargo that has probably been misdeclared, the dangers are too well established, he added. "Each such fire has the capability to result in a major casualty. One calculation that TT carried out, on the basis of findings where cargo was more likely than not to have been wrongly declared, concludes that there could well be in excess of 150,000 ticking time-bombs at sea each year."

An official spokesperson at the World Shipping Council told ITLN: “We are aware of sources that estimate that 10 percent of the containers with DG are either mis- and/or non-declared. In any event, what we do know from experience is that there is still a significant amount of cargo that is not properly declared, and thus cannot be handled in the safest possible way. While far from all of the mis-declared dangerous goods cause incidents, even one such incident can be fatal to seafarers or port stevedores, causing death or serious injury. A fire at sea or in port can also result in significant environmental impact at sea or in the coastal area and be a potential threat also to the health and livelihoods of coastal communities.”

Codes & Standards - are they enough?
The International Maritime Dangerous Goods (IMDG) code was developed for the transport of dangerous goods by sea covering issues like packing and stowage. The carriage of dangerous goods and marine pollutants follow the Safety of the Life at Sea (SOLAS) and the International Convention for the Prevention of Pollution from Ships (MARPOL) regulations.

Goods have been broadly classified into nine categories:

In May 2021, a chemical fire on cargo ship MV X-Press Pearl off Colombo, Sri Lanka was the reminder that cargo can suffer irretrievable loss and damage in transit. "Hour-by-hour reports from Sri Lanka described the chemical fire raging on the cargo ship MV Express Pearl as the vessel floundered in waters off the capital city and major port of Colombo. All crew members were rescued by the Sri Lankan navy but the ship and its freight containers were catastrophically damaged."

One of the worst maritime failures on record is the destruction of MOL Comfort, which broke in two in mid-2013 sending nearly 4,300 containers to the bottom of the Indian Ocean. Fortunately, all crew members survived by abandoning ship swiftly and safely, DHL added in its update.

"There is little known information about the risk perceptions across the range of consignments and commodities moved globally in the intermodal supply chain," Peregrine Storrs-Fox of TT Club said. "It is known that as little as 50 percent of cargo carried in the maritime mode is insured for all risks. While in some instances that may reflect the value of the goods, the cost of such cargo cover is extremely small and generally would protect cargo interests for more than simply the value at risk, for example including General Average contributions."

Based on regular WSC surveys of member-companies, it is estimated that for the 12-year period from 2008 to 2019, there were on average a total of 1,382 containers lost each year. “Containers lost overboard thus represent less than one thousandth of 1% (0.001%) of the roughly 226 million packed and empty containers currently shipped each year.”

“After that we have no official data but can only give indicative comments based on known incidents. With that caveat, 2020 was an aberration, with media reports indicating over 3,000 containers lost at sea, most in weather related incidents. So far, 2021 numbers for containers overboard are more in line with the previous trendline,” WSC spokesperson added.

What shippers & carriers need to do and are doing
The most important thing shippers can do, WSC says, to prevent losses lies in making sure that cargo is conscientiously and proactively packed, declared and placarded correctly and in line with applicable rules and regulation (the IMDG Code) and the guidance set out in the Cargo Transport Unit (CTU) Code. “To facilitate this, the Cargo Integrity Group – where WSC is a founding member – has developed a short CTU Code Guide and a practical checklist to make the information in the CTU Code more accessible and easier to use for all parties in the supply chain.”

What are carriers doing to hedge risks? Given how risk and insurance works for container shipping, the above question needs a little background, the WSC spokesperson said.

“An international framework of strict liability (i.e. regardless of fault) and compensation conventions has been agreed by the International Maritime Organization (IMO) to ensure that valid claims for pollution and other damage from ships are met promptly without the need for time consuming and costly legal action.

“All of the liability conventions provide for strict liability of the shipowner and compulsory insurance with rights for claimants to bring their claims directly against the shipowner’s insurer to an amount which is guaranteed by the insurer and certified by states parties.”

Worries about seafarers
Posttraumatic Stress Disorder (PTSD) among seafarers after containers topple is seen as a big crisis. “Seafarers regrettably face many significant challenges, which land-lubbers will scarcely appreciate,” Peregrine Storrs-Fox said. “Extreme weather conditions have previously resulted and will continue to result in PTSD, compounded by other factors such as COVID restrictions in ports or preventing crew transfers."

Containers overboard remains one of the rarest incidents at sea – stress from the threat of piracy is a much bigger mental health issue together with the unfair and unreasonable discrimination, and in some cases quite inhumane treatment of seafarers when it comes to Covid-19 regulations, preventing them from getting adequate medical care or preventing normal crew change, the WSC spokesperson added.

“Unfortunately, PTSD is one of the physical and mental injuries that seafarers can suffer from incidents caused by mis-declared cargoes and other incidents, notably containership fires that tragically, over the years, have resulted in fatalities – deaths that are entirely preventable if shippers follow the law (IMDG Code) and the guidance set out in the CTU Code. All these injuries should be prevented as far as possible. That is why the WSC and the Cargo Integrity Group keep working to inform manufacturers, exporters, importers and cargo packers about the need to pack and declare cargoes safely.”