The fire that broke out on ZIM Kingston last week off the Canadian coast has brought the focus back on non-/mis-declared goods in cargo. 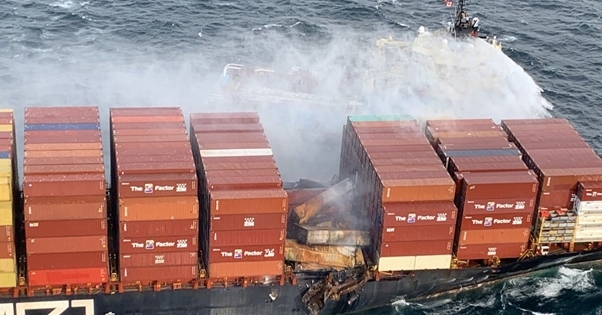 October 25, 2021: The fire that broke out on ZIM Kingston last week off the Canadian coast has brought the focus back on non-/mis-declared goods in cargo.

The number of fires/explosions resulting in total losses increased in 2020, hitting a four-year high of 10, according to a study by marine insurer Allianz Global Corporate & Speciality.

"Fires often start in containers, which can be the result of non-/mis-declaration of hazardous cargo, such as chemicals and batteries. When mis-declared, these might be improperly packed and stowed on board, which can result in ignition and/or complicate detection and firefighting. Major incidents have shown container fires can easily get out of control and result in the crew abandoning the vessel on safety grounds, thus increasing the size of the loss."

In the latest update, DANAOS Shipping Company, managers of container ship ZIM Kingston, said it has received permission from the Canadian Coast Guard to allow the boarding of technical experts from the company as well as two marine firefighters who are now on board the vessel.

Permission was also given for six members of the vessel’s crew to return but adverse weather conditions have not allowed them to board yet, according to a statement from DANAOS.

"The two firefighters arrived on board to evaluate the situation and will be joined later today by four more firefighters as well as an expert team who will be responsible for the final report to the Canadian Coast Guard before ZIM Kingston is cleared to enter the port of Vancouver," the statement said.

Earlier, On October 23, two damaged containers on board caught fire, following the collapse and loss of several containers earlier that day due to extreme weather.

The Master of the vessel ordered the evacuation of 16 members of the crew with the assistance of the local coast guard while he and other key personnel remained on board to oversee the fire extinguishing effort. No injuries were reported and the fire appears to have been subdued.

Reports said the fire on ZIM Kingston was triggered by a hazardous material identified as potassium amyl xanthate, a compound used in the mining industry.

The fire on ZIM Kingston appears to be under control, Canadian Coast Guard officials said on Sunday.

"I wish everyone could see the incredible hard work going on right now on every front by all my Coast Guard colleagues."

The Canadian Coast Guard had also shared a video of efforts being made to control the fire.

The fire on the #ZimKingston has been stabilized. Depending on weather tomorrow, hazardous materials firefighters will board the ship to fight any remaining fires and ensure the fire is out. pic.twitter.com/IKIhY5Ayrm

"The Master of the vessel ordered the evacuation of the crew with the assistance of the local coastguard, while he and other key personnel remained on board to oversee the fire extinguishing effort," the statement said.

Cargo vessels accounted for more than a third (18) of all vessels lost in 2020, Allianz said in its report. “The number of losses involving cargo and passenger vessels increased year-on-year. Analysis shows cargo vessels account for 40 percent of total losses over the past decade (348).”

MV ZIM Kingston was built in 2008 and sails under the flag of Malta. Online tracking data show the ship left the port of Busan in South Korea on October 6 and was scheduled to arrive at the Port of Vancouver on October 20.