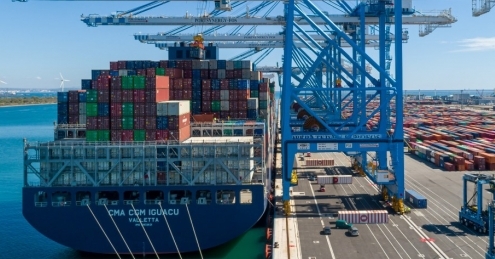 The first of these ships, the CMA CGM TITAN, made its first call at Marseille Fos between November 25 and 27, and is currently en route to Dunkirk where it will make a port of call on December 3 before traveling to Le Havre, according to an official statement from CMA CGM.

The CMA CGM TITAN is carrying more than 9,000 TEUs, primarily furniture, household appliances, DIY and home decor items, toys, bicycles and scooters, and automotive parts. "All these goods will then be shipped to final destinations to supply French retailers in the run-up to Christmas, as well as French manufacturers."

The CMA CGM TITAN will be followed by the APL LE HAVRE and APL GWANGYANG, the statement added.

CMA CGM has been taking measures to enhance its French services including:

Addition of Le Havre to FAL 1 rotation, the Group’s main shipping line between Asia and Northern Europe as well as Dunkirk, which is already served;

Addition of the largest ships in the Group’s fleet serving Le Havre and Dunkirk (nine 23,000 TEU ships). These ships, operated under the French flag and commanded by French officers, are powered by liquefied natural gas (LNG); and

Deployment in progress of 15,000 TEU ships serving Marseille Fos, replacing 11,000 TEU ships. These ships, powered by LNG, are operated under the French flag and commanded by French officers.

The Group, along with Hapag Lloyd, had also decided on September 9 to freeze spot freight rates until February 1, 2022, “to give its clients greater visibility against the backdrop of rising spot freight rates due to port congestion and the major imbalance between demand and effective shipping capacity.”