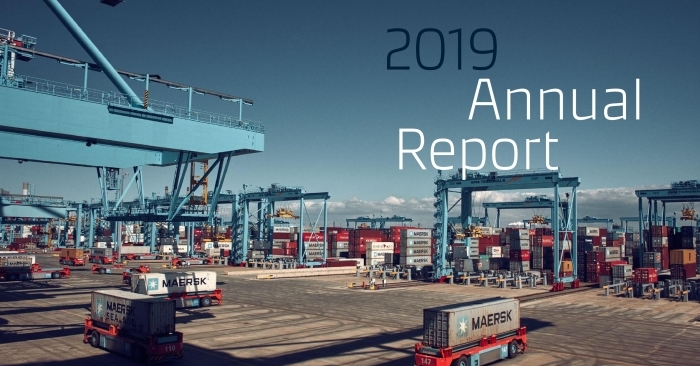 February 20, 2020: Despite weaker market conditions and global container growth of only 1.4 percent, A.P. Moller – Maersk's Annual Report 2019 showed an increase in earnings before interest, tax, depreciation and amortisation (EBITDA) of 14 percent to $5.7 billion compared to 2018 and the EBITDA margin increased to 14.7 percent.

Net interest-bearing debt decreased through the year to $11.7 billion from $15 billion in 2018. In 2019, $1.3 billion was distributed to shareholders via ordinary dividends and share buybacks. An ordinary dividend equal to $469 million was paid to shareholders and as part of the share buy-back programme announced in May 2019, the company bought back shares worth $791m.

“Despite weaker market conditions, A. P. Moller - Maersk was able to improve profitability and cash flow. Our cash return was healthy, and we continued the reduction of net interest-bearing debt, leading to a further deleveraging of $3.3 billion over the year. It gives us a solid starting point for 2020 to further expand our end-to-end offering within container logistics while at the same time managing the market challenges that are obviously out there,” says Søren Skou, CEO, A.P. Moller - Maersk.

“While we still need to improve returns, we delivered solid progress in our financial performance in 2019 while progressing the business transformation, in spite of weak trade growth, ongoing trade tensions and geopolitical uncertainty in many markets,” explains Søren Skou.

“While we still need to improve returns, we delivered solid progress in our financial performance in 2019 in spite of a backdrop of weak trade growth, ongoing trade tensions and geopolitical uncertainty in many markets.” Søren Skou CEO A.P. Moller - Maersk #MaerskResults #Maersk pic.twitter.com/AWZIfVMe1B

Ocean buisness
In Ocean, EBITDA in 2019 increased 15 percent to $4.4 billion and the EBITDA margin of 15.3 percent increased by 2 percentage points, driven by a lower cost base. Revenue was $28.4 billion with a small decrease in volumes to 13.3 million Forty Foot Equivalent (FFE). Unit cost at fixed bunker decreased by 1.7 percent, mainly due to improvements in capacity management and foreign exchange rate developments.

Logistics business
In 2019, EBITDA in Logistics & Services increased 24percent to $ 238m with an EBITDA margin of 4percent, while revenue decreased slightly to $6 billion from $6.1 billion, driven by a decrease in sea and air freight forwarding activity, which was only partly offset by an increase in warehousing and distribution.

“The focus of 2019 was on improving the financial performance on ocean and creating a better customer experience through increased reliability, improved customer experience and introduction of online services and products such as Maersk Spot, a unique product in the market that offers price and loading guarantee. Also during the year, we took further steps in the integration of the business on a structural level and how we go to market,” says the release.

Maersk reported a cash return on invested capital improvement (CROIC) for the full year of 9.3 percent due to strong cash flow. Furthermore, non-Ocean revenue increased by 0.1 percent, when adjusted for the closing of production facilities in Maersk Container Industry. Strong revenue growth in gateway terminals was offset by declining freight forwarding activities. Gross profit in Logistics & Services grew 8.7 percent to $1.2 billion, reflecting a gross profit margin of 20percent.
Synergies harvested from the Hamburg Süd acquisition and the integration of transport and logistics reached $1.2 billion, which is above the expected target. The long-term target on return on invested capital after tax (ROIC) grew to 3.1 percent in 2019, compared to 0.2 percent the year before.

What we can expect from Maersk in 2020?
A.P. Moller - Maersk expects an EBITDA of around $5.5 billion, before restructuring and integration costs. The organic volume growth in the ocean is expected to be in line with or slightly lower than the estimated average market growth of 1.3 percent for 2020.

“The outlook and guidance for 2020 is subject to significant uncertainties and impacted by the current outbreak of the coronavirus in China, which has significantly lowered visibility on what to expect in 2020. As factories in China are closed for longer than usual in connection with the Chinese New Year and as a result of the coronavirus, we expect a weak start to the year. 2020 is also subject to uncertainties related to the implementation of IMO 2020 and the impact on bunker fuel prices and freight rates combined with the weaker macroeconomic conditions and other external factors,” says the release.

The accumulated guidance on CAPEX for 2020-21 is still $3.4 billion. A high cash conversion (cash flow from operations compared to EBITDA) is expected for both years.

Watch the all new ‘All the Way’ animation of Maersk