X-Press Pearl was not allowed to offload leaking box in India, Qatar 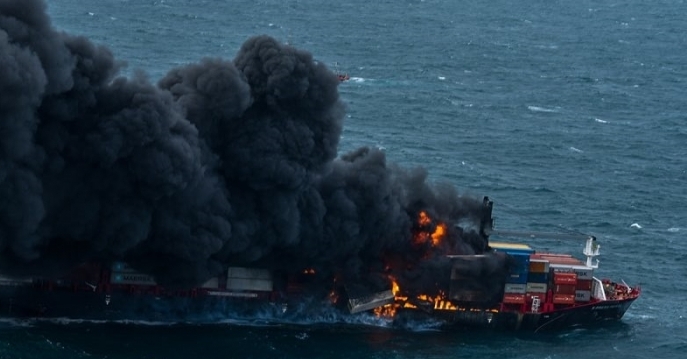 X
General Average has been declared on the X-Press Feeders ship, which was carrying around 25 tonnes of acid among the 1,486 containers onboard. (Photo: Sri Lanka Air Force)
Our Correspondent29 May 2021 11:41 AM GMT

Fire has ravaged the entire length of the three-month-old, 2,700 TEU, X-Press Pearl, with its owner now accepting a constructive total loss is inevitable.

“The ship at the centre of an environmental catastrophe off Sri Lanka was not allowed to offload boxes with leaking acid at two ports,” reports Splash 247.

The ship, which caught fire while at anchorage off Colombo, suffered an explosion, necessitating the swift evacuation of the crew. General Average has been declared on the X-Press Feeders ship, which was carrying around 25 tonnes of acid among the 1,486 containers onboard.

Tim Hartnoll, the executive chairman of X-Press Feeders, said that poor packaging was responsible for the acid leak, which the crew had detected while in the Arabian Sea thousands of kilometres away from Sri Lanka. On detecting the leak, the ship’s captain then contacted two ports – Hazira on the west coast of India and Hamad in Qatar – requesting to offload the containers in question. The requests were denied and the ship, which was delivered from a yard in China this February, made its way to Sri Lanka.

“It was a case of not in my backyard syndrome,” Hartnoll said.

While salvage teams – assisted by Sri Lankan and Indian military forces – fight to minimise damage, acid and fuel is thought to have spilled into the sea, and the ship’s owner is anticipating the London P&I Club-insured vessel will be declared a total loss.

A separate source at the company commented, “This disaster could have been prevented had those ports done their duty and taken in the cargo rather than endangering the crew and the ship.”