October 30, 2019: Logistics giant UPS on Tuesday announced the routing of its latest freighter aircrafts Boeing 747-8F and Boeing 767 to India through Delhi. 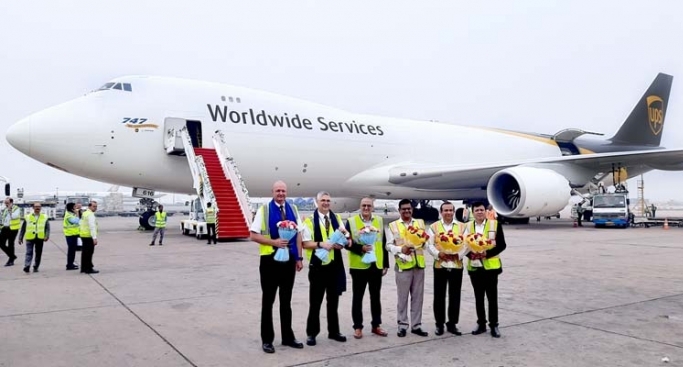 October 30, 2019: Logistics giant UPS on Tuesday announced the routing of its latest freighter aircraft Boeing 747-8F and Boeing 767 to India through Delhi. The six weekly flights come from Shenzhen via Bangkok before landing in Delhi and then leave to Cologne, the largest international hub of UPS. The aircraft was welcomed at Indira Gandhi International Airport on Tuesday.

The release reads: “Businesses in North India will gain faster access to markets in the west, with extended pick-up time, later commercial clearance and shorter time in transit to capitalize on growth opportunities in Europe and United States. The flights will similarly support imports from Asia due to its origin in Shenzhen via Bangkok before landing into Delhi.”

“UPS’s goal is to increase business efficiency and make the global marketplace more accessible to Indian customers. UPS’s largest aircraft - the Boeing 747-8F freighter received a ceremonial welcome from Delhi International Airport Limited (DIAL) for its first landing in the city. This plane is part of UPS’s investment of adding 10 million pounds of new lift capacity globally – the largest current expansion by any carrier. UPS has already taken delivery of 18 of 49 new aircraft previously announced and will receive the remainder by 2022,” says the release.