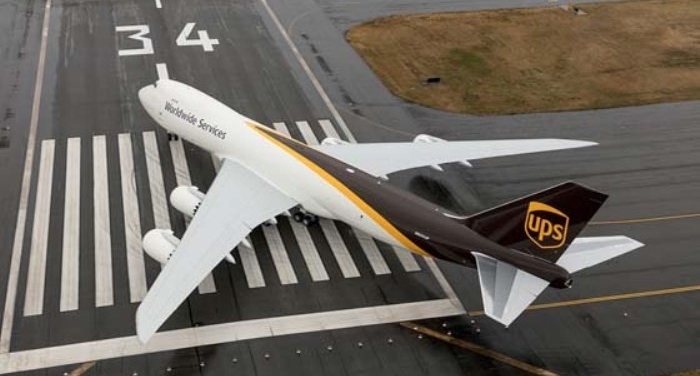 February 6, 2018: UPS is launching a daily non-stop flight from its Worldport® global air hub in Louisville, KY, to Dubai, UAE, improving time-in-transit from North and South America to key destinations in the Middle East by a full business day. The flight, operated with one of UPS’ new 747-8F freighters, is part of the build out of UPS’ smart global logistics network and takes place as the company plans for its role as official logistics provider for Expo 2020 Dubai.

“The UAE trades with all 50 US states and has grown to become the US’ largest export destination in the Middle East. Dubai’s importance as a global trade hub increases every day – and we’re now getting there a day faster from North and South America with our small package express carrier and cargo offerings,” said Jim Barber, president, UPS International.

At approximately 7,700 miles (12,400 km), the route is the longest regularly-scheduled flight UPS has ever operated, and is made possible by the new 747-8s, which offer greater payload over long range. The new flight is currently operating on a weekly basis and will become a daily flight on February 27th, operating Tuesday through Saturday. The new flight is part of plans to expand UPS’ presence in Dubai, the headquarters of UPS’ Indian Subcontinent Middle East & Africa (ISMEA) region, by establishing capacity, technology and staff capabilities to serve customers shipping to and through Dubai in the buildup to Expo 2020 and beyond. UPS has been operating in the region since 1989.

The Louisville-Dubai flight leg is part of an “around-the-world” flight route that begins and ends at UPS Worldport in Louisville, KY. For the volume from North and South America that passes through Worldport, there is a full day time-in-transit improvement to Dubai. After arriving in Dubai, new package and freight volume is loaded onboard the aircraft before it departs for Shenzhen, China, home to UPS’ largest facility in Asia. US-bound volume is then loaded in Shenzhen and the aircraft returns to Worldport via Anchorage, AK. With the addition of this new flight, the volume capacity on UPS’ current Cologne to Dubai flight increases to better serve the needs of customers connecting Europe to the Indian Subcontinent, Middle East and Africa.