Home > Shipping > FROM MAGAZINE: The logic of Incoterms
Shipping

FROM MAGAZINE: The logic of Incoterms

Incoterms are a set of rules which define the responsibilities of sellers and buyers for the delivery of goods under sales contracts. First published by the ICC in 1936, the Incoterms rules are revised from time to time. The latest revision came into force in January 2011, replacing the version published in 2000. 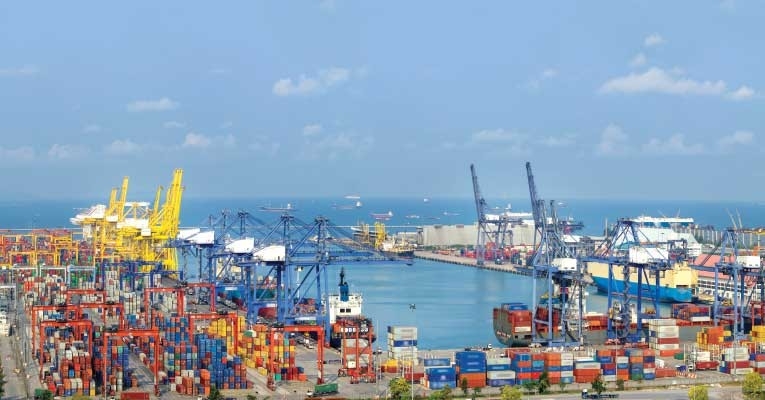 Incoterms are a set of rules which define the responsibilities of sellers and buyers for the delivery of goods under sales contracts. First published by the ICC in 1936, the Incoterms rules are revised from time to time. The latest revision came into force in January 2011, replacing the version published in 2000. Sabyasachi Mukherjee explains the terms and put them in the context of current global trade and commerce.

Since its inception in 1936 the ubiquitous INCO term (International Commercial Terms) has come a long way in promoting international trade by bringing clarity and transparency to transactions. As logistics service provider some understanding of international trade would help in making logistics execution easier. Generally, we tend to concentrate on logistic execution, seldom realizing that logistics by itself does not have any existence. The need of logistics is derived out of the transaction between the buyer and the seller. Hence understanding the context in which logistics operates is deemed necessary.

Think of a scenario where, the buyer and seller get in touch with each other and make a transaction. This transaction could be for selling and purchasing of ‘IT services’. In such circumstances the need of logistics does not arise. The seller raises an invoice on the buyer with the cost of the services rendered. This transaction could be across borders, but it involves in buying and selling of intangible services. There is no tangible product involved hence it does not qualify for a transportation activity.

So, when there is a transaction, and it involves tangible items, this translates into a situation where logistical support is required. Apart from the transfer of title, the buyer would also like to take physical control of the goods. Therefore, he would like the goods to be transported to a place where it would be under his jurisdiction. In such transactions the terms on which the deal was agreed upon, is specified. In the commercial invoice which was issued by the seller, the INCO terms mentioned, clearly demarcates the tasks and responsibility that would be shared between the buyer and the seller.

As a logistics provider when we are entering into a contract with our customer it is beneficial if we know the INCO terms. We would be in a better position to understand the task that is supposed to be executed as a logistics service provider and the conditions under which those tasks should be performed. We will also know the mode of transport, who will be paying for the service rendered and the place of payment. Well this does not mean that if the terms are “CIF” then as a logistics provider we will be paid before the cargo is transported. The payment terms are dependent on the terms of our service contract. If our contractual agreement provides a credit period of 3 months. Then we will probably get paid at a much later date, may be after the cargo is delivered to the consignee.

INCO terms and transport mode
Some Incoterms are specific to a transport mode for example FOB, FAS, CFR and CIF are used when the transport is done via Ocean or Inland water ways. Whereas EXW, FCA, CPT, CIP, DAT, DAP and DDP are for multimodal transportation. A common mistake is the choice of an INCO term which is not appropriate for the intended mode of transport. The terms must be used for the correct mode of transport if they are intended to offer protection to the buyer and the seller. As a logistics provider it is very important to verify the INCO terms and then arrange for the appropriate mode of carriage. During the time of customs clearance for ascertaining the “dutiable value” of the goods some idea of INCO terms is advisable. 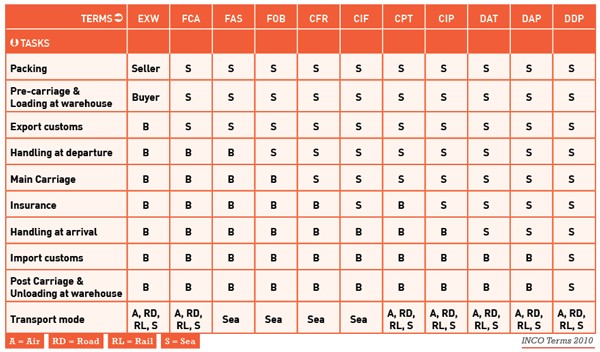 Structure of the INCO Terms
There are eleven INCO terms in total and we are following the 2010 version. They are grouped into four categories E,F,C and D. In group E & F the obligation of the sellers is minimal, and the buyer is supposed to undertake most of the responsibilities and the tasks. As we move to group C & D the seller assumes most of the tasks and responsibilities. Whereas the buyer’s responsibility is limited to customs clearance and unloading the cargo at the destination.

The transportation of the goods from the sellers to the buyers premises is divided into various stages. Each stage is an activity by itself. When a “Freight Forwarder” is involved he acts as an integrator of different activities and the seller or the buyer has little knowledge about it. The seller and the buyer negotiate the price of the goods and then divides the task and responsibility amongst themselves. This division of task translates into adopting an appropriate Incoterm which becomes the terms of the purchase of the goods. Below is the table which depicts the division of task between the seller and the buyer and the precise INCO terms which construe out of such segregation.

Incoterms offer parties an opportunity to clarify their roles by using internationally accepted contractual standards and remove ambiguity and disagreement which might set in because of cultural differences between the trading parties. The Incoterms are incorporated in contracts for the sale of goods worldwide and provide rules and guidance to importers, exporters, lawyers, transporters and insurers. As a logistics provider our exposure to the Incoterms will help the traders to avoid costly mistakes.

Below are the few examples how the Incoterms have helped the trading community by removing ambiguity and bring in more adaptability to the new economic and political environment.

Rules for string sales
In sale of commodities where goods are sold during transit “down a string”. In such occurrence the shipper in the middle of the string is not the actual shipper because the first shipper has originally shipped the cargo. The subsequent shipper in the string performs its obligation towards its buyer not by shipping the goods, but by procuring the goods that have been shipped already. The 2010 rule include such accommodations and removes the ambiguity from this transaction.

Rules for local & international trade
The INCO terms can be used wherever deemed fit. The 2010 version of Incoterms states that the application of the formalities is restricted to those instances where it could be applicable. This development has taken place because of USA’s willingness to use INCO terms in domestic trade and the EU acting as a one large trade block and making its political borders less relevant.

The author is a logistics professional with over 20 years of experience in the industry and had been associated with MSC Mediterranean Shipping Company SA, CSAV, ZIM Integrated Shipping Services, Matson Integrated Logistics, NYK Line, DHL Global Forwarding and Ericsson AB in varied capacities. His areas of interests are 'logistics management and automation' and 'business process re-engineering'.