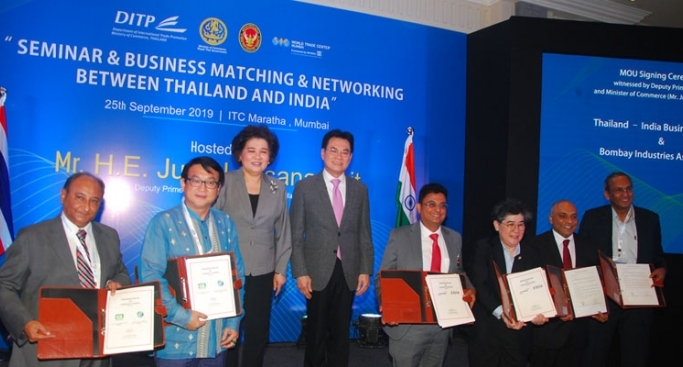 The announcement was made in Mumbai during the Thai-Indo Business Networking (TIBN), a trade networking platform organised by the department of international trade promotion (DITP) and ministry of commerce, Thailand. The agreement will see Bigbasket promoting Thai products through Thai flagship stores on its platform.

The event also witnessed the launch of Agri-Trade Supply Chain Alliance (ATSCHA), which will ease the trade relations and increase trade commodity supply between both the countries.

Laksanawisit said, “There are many states in India which have service potential for us to promote Thai products which include Maharashtra, Gujarat, Tamil Nadu, Telangana, New Delhi, and West Bengal. Thailand’s service sector can supplement India’s capabilities in areas such as agro-logistics and shipping services, distribution and warehousing, construction and interior decoration and hospitality services, which will have positive impacts on SMEs (small and medium enterprises) and the local economy.” He also ensured that the Thai government can assist the Indian investors in case of any issues they face while foraying into the market.

Thailand is focusing on expanding the export base of key agro products like rubber, rubber wood, and tapioca starch; construction materials and logistics services. Other exports to India include gems and jewellery, plastic, chemicals, steel and iron, air conditioner parts and units. The country is an export-oriented economy with exports accounting for around 65 percent of the GDP. In 2018, global rubber exports of Thailand stood at $15.63 billion; and tapioca export touched 4.5 million tonnes at 59,012 million Baht.

Commenting on signing any future deal with Future Group CEO Kishore Biyani, who was present at the event, Laksanawisit said that Future Group has expressed interest in promoting Thai beauty and cosmetics products, which are of great interest among the Indian consumers.

The visit is an integral part of Thai government to boost alliances with India for a number of reasons, which include optimising free trade agreement (FTA) benefits, developing food processing industry, promoting Thailand as a trading nation and eventually establishing healthy channels of trade exchange which will benefit the Thai industries.

Laksanawisit added, “The trade war between the US and China is having an adverse effect on the global economy. It is India’s fortunate position as fundamentals of the domestic economy is strong with over 1.3 billion population, so that the trade war will not have a significant impact on the economy. India has stable growth and one of the biggest markets in the world. The huge consumer base in India demonstrates why Thailand is looking forward to work with India. This is a great opportunity for Thailand to explore and nurture trade partnerships and joint investments in the near future.”

India is Thailand’s tenth-largest export market. Thai-Indian trade reached $12.5 billion, comprising Thai exports to India worth $7.6 billion and Thai import from India of $4.9 billion. Recently, the trade between the two nations has grown at least 60 percent since 2016 and in the Association of Southeast Asian Nations (ASEAN) Thailand now ranks as India’s fifth-largest trading partner.