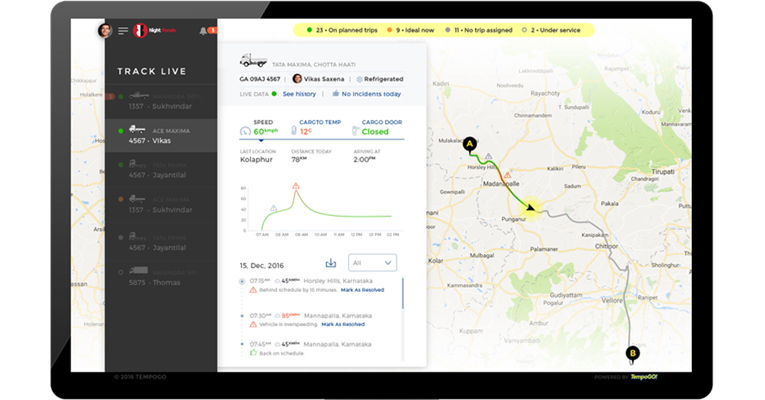 TempoGO—an IoT and SaaS fleet management platform for the transportation sector—won against 59 ventures participating from 11 different countries. As winners, they received a $250K investment from Javelin Startup-O Victory Fund, a Singapore-based seed fund.

"TempoGO is one of our earliest investments in the Indian market and adds a new dimension to our diversified portfolio that spans across South-East Asia. The experienced team, early traction and a big market opportunity make us excited to work together for the next phase of growth," said Steve Davies, CEO, Javelin Wealth.

TempoGO has also raised additional funding from NB Ventures of Dubai, a $50+ million fund whose Indian investments include participation in the Series A of LetsTransport (co-invested with GMO of Japan) and the $7 million Series A for HealthifyMe.

This raises the quantum of TempoGO’s seed funding to over $ 1.35 million (Rs 9 Crore), which includes funding from K2 Capital of Hong Kong.

"TempoGO resonated with our platform experts and proved itself worthy of victory. TempoGO's proposition is in tune with the ongoing disruption in the smart vehicles space" says Anuj Jain, Co-founder and CEO of Startup-O.

“TempoGO has been revenue positive since inception and we’ve been growing our revenues month-on-month by 50 percent to 100 percent in this financial year” says co-founder and chief operating officer Pranav Shirke. “We expect to double it again within the next two quarters”

“Unit economics has been positive from day one and we make money on every installation” says Mihir Shetye, co-founder and Head of Customer Success. “What is more gratifying is that almost every single company which gave us a paid pilot has exponentially increased their next order”

Pune-based Shree Balaji Roadlines is one such company. “We had done a paid pilot project of 50 vehicles in the first phase. The results were so good that we have signed-up for 300 more in Phase 2…” says Vijay Gaikwad, managing director of Shree Balaji which operates a fleet of over 900 vehicles.

TempoGO serves the passenger commercial vehicle segment too. The company says it does not compete with the clutch of startups that are transportation aggregators and marketplaces. On the contrary, it enhances their service-delivery.