TechEagle – a Gurugram based DeepTech start-up drone that is building Drone logistic airline has partnered with govt. of Meghalaya and Smart Village Movement (SVM) to carry out India's first hybrid e-VTOL Drone delivery of lifesaving medicines. The collaboration is aimed at transforming the healthcare supply chain for hard-to-reach population. 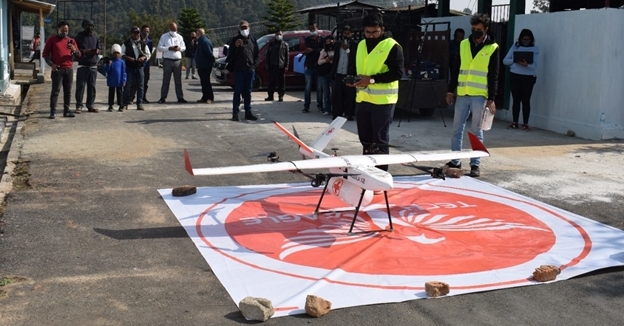 November 27, 2021: TechEagle – a Gurugram based DeepTech start-up drone that is building Drone logistic airline has partnered with govt. of Meghalaya and Smart Village Movement (SVM) to carry out India's first hybrid e-VTOL Drone delivery of lifesaving medicines. The collaboration is aimed at transforming the healthcare supply chain for hard-to-reach population.

Hybrid e-VTOLs are Vertical Take-Off & Landing Vehicles that take off vertically like a helicopter and transform themselves into fixed-wing mode (like passenger aircraft) for travelling longer distances with higher speed, and when they reach the delivery locations, transforms back to helicopter mode to land accurately which makes it efficient to use in diverse terrains. TechEagle's in-house e-VTOLs, Aquila X2, has been developed to such that it can operate in varied geographical conditions including the mountainous Northeast.

Doctor at Nongstoin district hospital gave the medicine box to TechEagle team to load inside the Drone. Upon successful loading of the medicine into the drone bay, TechEagle's e-VTOL Drone AquilaX2 took off from Nongstoin District Hospital vertically like a helicopter and converted automatically into fixed wing (like passenger aircraft) mode upon reaching the mission height. Drone cruised complete aerial distance of 25km at 90kmph speed to reach Maweit PHC. As soon as it reached to landing point at Maweit PHC, converted itself back to rotary wing mode to land vertically like a helicopter. TechEagle team unloaded the package and handed over the medicine box to doctor at Maweit PHC.

TechEagle's e-VTOL Aquila X2 delivered the lifesaving drugs to a 25km distance in less than 25 minutes. Drones have potential to improve lives of 18,50,000 citizens of Meghalaya.

The company's state-of-the-art drone delivery technology ensures consistent, safe and reliable distribution of life-saving drugs (medicines, vaccines, blood and other medical essentials) in several parts of the state with the reverse logistics of samples for quick diagnosis.

Conard K Sangma, chief minister, Meghalaya, said, "We all know what great technology can do but to be able to use it for the benefit of the citizens of the state, something which is so meaningful to the people. Here the technology has been used for a very good cause. We look forward to use the technology in the long run. Today we have used it for the healthcare and in future we hopefully will be able to use this in agriculture and other allied sectors."

Vikram Singh Meena, founder & CEO of TechEagle said, "Aerial routes are the best possible way to access hard-to-reach places in hilly terrains of northeast. Today, we are proud of the fact that TechEagle's made in India Hybrid e-VTOL is solving grassroot problems faced by citizens living in the remote areas. We have reduced delivery time from 4 hours to 25 minutes. e-VTOL drone technology is going to leave a huge impact to enable better healthcare in the remotest parts of the world."

Tulenam Laloo, project lead, - healthcare at Smart Village Movement, Berkely Haas, said, "The use of drone-based deliveries in healthcare is a promising means to augment supply chain management and support last-mile access. Meghalaya and other North-Eastern states would immensely benefit from its application, considering the unique terrain. The use case to be studied through TechEagle's trial at West Khasi Hills District shall be something that we shall look forward to"

TechEagle is a pioneer and leader in drone delivery in India. It enables government departments & enterprises around the world to transport parcels for last mile & mid mile logistics. In a short span of time, the company has achieved several milestones in its business journey. In Sep 2021, the company completed Asia's first cold chain Vaccine delivery by Drones in the state of Telangana with the World Economic Forum's- Medicine from the Sky Project. In 2020, became one of the first company to receive BVLOS (Beyond Visual line of Sight) Drone delivery trial approvals from MoCA, DGCA, AAI and MHA. In addition, it has successfully completed World's first tea delivery by Drones in 2018.