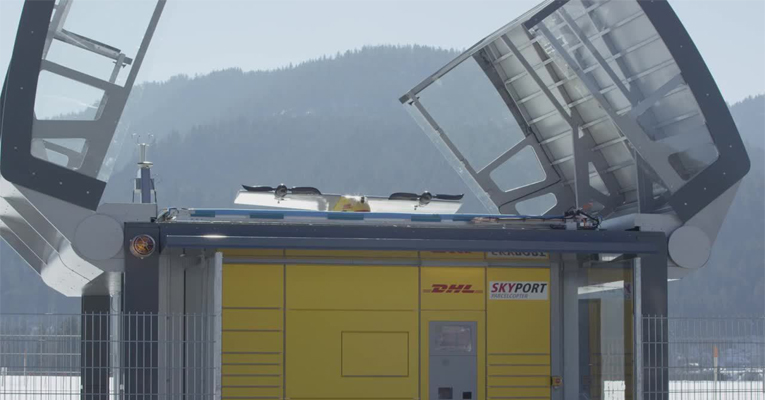 Nov 16, 2016: DFS Deutsche Flugsicherung, Deutsche Telekom as well as Deutsche Post DHL Group and RWTH Aachen University are set to launch a joint research project on drones. At the DFS technology conference, The Drone Challenge, held in Langen, Germany, DFS Deutsche Flugsicherung, Deutsche Telekom and DHL Parcel would sign an agreement to research concrete applications of unmanned aircraft. The objective is the safe integration of unmanned aircraft in air traffic.

In the future, the mobile network could be used for the surveillance and monitoring of unmanned aircraft beyond the remote pilot's line of sight. One application is the delivery of parcels. DFS Deutsche Flugsicherung, Deutsche Telekom and DHL Parcel together with the RWTH Aachen University have launched a research project to study the possibilities.

One goal of this project is to examine if Deutsche Telekom's mobile network can be used to connect unmanned aircraft systems (UAS) to the mobile internet. A prototype for a UAS traffic management system (UTM) is also to be developed to raise the safety level in uncontrolled airspace and allow flights over larger distances. Finally, the safe and rapid delivery of parcels in urban areas using autonomous aircraft is to be tested, which will open up the chance to offer new logistics services. All those involved are also interested in proving the business case underlying such an overall system.

The first application is going to be the DHL Parcelcopter. DHL has been running its own research project since 2013. In the latest trial run at the beginning of 2016, the delivery of urgently needed goods, such as medicines, was tested in the Bavarian village of Reit im Winkl. For the first time, end-customers could use especially modified Packstations, dubbed DHL SkyPorts, to send and receive shipments. A safe interface between the Parcelcopter and end-customers was successfully trialled, showing that drones can be integrated into logistics processes.

These successes are the foundation for the new cooperation agreement, which will also see Parcelcopters advance, in close collaboration with the competent authorities, to making deliveries in an urban environment.

"We are more than convinced that the Parcelcopter has allowed us to create real added value in the field of logistics and offer people a new kind of access to the flexible and, most importantly, rapid dispatch and delivery of goods," says Jurgen Gerdes, Management Board Member for Post - eCommerce - Parcel at Deutsche Post DHL Group.

Equipping unmanned aircraft with a mobile communications module will allow the Parcelcopters to be located. This module will establish a connection to the mobile network and transmit data generated in the drone, such as GPS coordinates or information about the system. The first trial in the Ruhr region of Germany showed that a broadband data connection can be maintained up to an altitude of several hundred metres.

"In the future, unmanned aircraft will need to be able to communicate. This requires a resilient network and technology, the foundations of which we are jointly developing with strong and relevant partners," stresses Bruno Jacobfeuerborn, CTO Deutsche Telekom AG.

The air traffic controllers would then be provided with the information necessary for them to recognise potential conflicts. This would be a sensible solution given the significant rise in unmanned air traffic that DFS has recorded in the last few years and the further increases that are forecast.

Estimates show that there are around 400,000 private and commercial UAS in operation in Germany at the moment. DFS forecasts that this will rise to more than one million by 2020. This will require new solutions for the efficient monitoring of flights. "It is essential for the safe and fair integration of unmanned systems in air traffic that they are connected to the existing air navigation services infrastructure", stresses Klaus-Dieter Scheurle, CEO, DFS Deutsche Flugsicherung GmbH.

As part of the research project, which is scheduled to begin in 2017, three different uses of UAS will be examined: fire-fighting, agriculture and logistics.