January 23, 2021: The conference was attended by more than 175 participants from the states and UTs, central ministries and industry bodies. 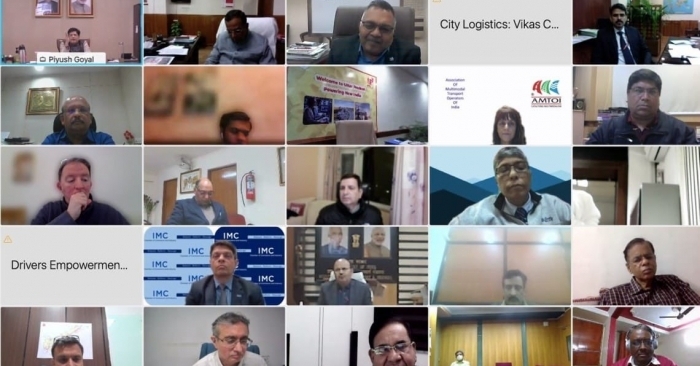 X
The conference was attended by more than 175 participants from the states and UTs, central ministries and industry bodies.
Our Correspondent23 Jan 2021 12:57 PM GMT

January 23, 2021: The conference was attended by more than 175 participants from the states and UTs, central ministries and industry bodies.

The national conference with states on logistics was organized on January 19, 2021 by the department of commerce, with the objective to initiate a consultative and collaborative framework for the central and state governments to work in a coordinated manner in the logistic sector.

The conference was attended by more than 175 participants from the states and UTs, central ministries and industry bodies.

The conference emphasized that states have a key role to play in improving the country’s logistics performance. A comprehensive 18-point agenda was presented to the states to improve the logistics. Thrust areas for logistics improvements in the states were identified as city logistics, simplification of approvals for warehouses, facilitation for warehousing development, reducing burden on truck movement and addressing shortage of truck drivers.

It was decided that ministry of commerce & industry will work with ministry of housing and urban affairs to focus on 50 cities for logistics planning initially. A plan for facilitation to reduce enforcement burden on truck drivers will be developed. Many States have already appointed senior officers as nodal officers for logistics and others will do the same in a short period of time.

Attended the 1st National Conference of States on Logistics & had fruitful discussion on ways to strengthen the logistics ecosystem.

Logistics is the lifeline of nation's economy, and Centre & States are working as a team for its transformation.

State level coordination committees on logistics will be formed. Central ministries looking after the transportation will appoint state nodal officers to coordinate with the states. The logistics division of the ministry of commerce & industry will embark on things on survey to assess and rank states on logistics performance. The state ranking will focus on data in addition to perspective on logistics performance. Support will be provided to the states to improve the capacity for logistics coordination. A city conference will also be organized to take forward the initiatives of the conference.

The States of Uttar Pradesh, Karnataka, Tripura, Gujarat and Madhya Pradesh made presentations, during the conference, on policy initiatives taken by their respective states in the logistics sector.

In his address, union minister of railways, commerce & industry, consumer affairs and food & public distribution Piyush Goyal said that a national logistic policy which is under consultation, will work as a template for better coordination and integrated development in logistics sector. He said that logistic team in the ministry of commerce & industry is trying to integrate various means of transport, documentation and stakeholders through technology platforms, into a much-simplified way of working, which will enhance the ease of doing business.