SpiceJet to commence daily flight between Jaisalmer-Jaipur under UDAN

October 28, 2017: This winter, SpiceJet will connect Rajasthan with a slew of flights to connect key tourist and business destinations in the State beginning October 29. 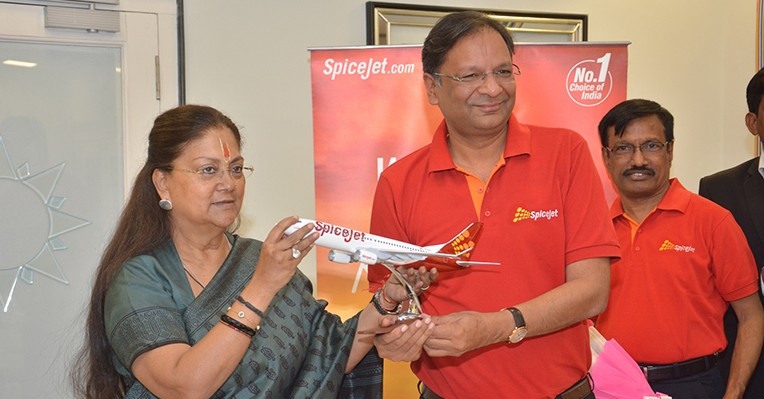 October 28, 2017: This winter, SpiceJet will connect Rajasthan with a slew of flights to connect key tourist and business destinations in the State beginning October 29. SpiceJet will launch its fourth daily flight under the UDAN (Ude Desh ka Aam Naagrik) scheme between Jaipur and Jaisalmer from October 29, 2017. SpiceJet will be the only airline to offer daily direct flight connectivity on this route which has a heavy demand from both business and leisure travellers. The announcement was made in the august presence of Vasundhara Raje, Chief Minister of Rajasthan.

SpiceJet will also recommence operations on the Delhi – Jodhpur and Mumbai – Udaipur sectors the same day. With the addition of Jaisalmer and Jodhpur, SpiceJet will be operating to 45 domestic destinations.

SpiceJet already connects Jaipur with Delhi, Ahmedabad, Chandigarh, Guwahati, Hyderabad, Jammu and Surat with direct flights and connects Goa and Mumbai via Ahmedabad and Surat respectively and a host of other Indian cities on the domestic network. Internationally, SpiceJet connects Jaipur with a daily flight to Dubai and convenient via connections to Muscat, Colombo and Bangkok.

Ajay Singh, CMD, SpiceJet said, “SpiceJet is proud to connect Rajasthan like never before. Today is a very special day for us as we announce the launch of multiple new flights to Rajasthan, India’s most vibrant and colourful state, which will greatly aid both leisure and business travellers. We are proud of the fact that SpiceJet will be the first and only airline to offer direct air connectivity between Jaipur-Jaisalmer; Jaisalmer-Delhi and Jaipur-Varanasi and we hope to continue to serve the people of Rajasthan with the same vigour in future.”