October 12, 2018: Boeing and SpiceJet celebrated the delivery of the carrier 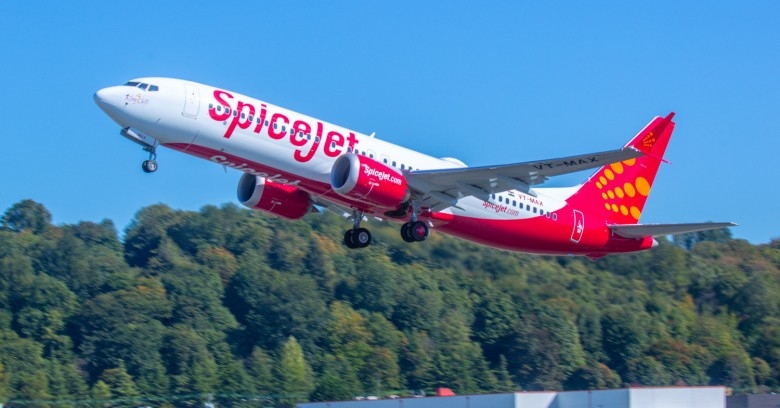 October 12, 2018: Boeing and SpiceJet celebrated the delivery of the carrier's first 737 MAX 8. The airline plans to use the 737 MAX to expand and standardise its fleet, while leveraging the super-efficient jet to reduce fuel costs per airplane by $1.5 million a year.

“We are excited to take delivery of our very first 737 MAX 8,” said SpiceJet chairman and managing director Ajay Singh. “The induction of our first MAX is a huge milestone in SpiceJet's journey. These new airplanes will enable us to open new routes, while reducing fuel and engineering costs, as well as emissions. The 737 MAX will dramatically reduce noise pollution and greenhouse gas emissions. Passengers will benefit from a large number of premium seats and, for the first time in India, broadband internet on board.”

This is the first of up to 205 737 MAX airplanes SpiceJet has announced with Boeing. The new and improved single-aisle airplane will help SpiceJet lower its emissions output, which is a key initiative for the carrier as it looks to increase regional and international routes.

SpiceJet's new 737 MAX airplanes arrive at a time when India's commercial aviation market continues to grow at significant rates. According to industry data, domestic air traffic in India has grown about 20 percent in each of the past four years with an upward growth trajectory going forward.

“India is a fast growing market for commercial airplanes and services,” said Ihssane Mounir, senior vice president of Commercial Sales & Marketing for The Boeing Company. “The 737 MAX for SpiceJet is the perfect airplane for this market and it will become a key ingredient for long-term success, especially as oil prices continues to put pressure on airlines. The market-leading efficiency and reliability of the MAX will pay immediate dividends for SpiceJet's commercial operations.”

In preparation for their new 737 MAX, SpiceJet signed up to leverage Boeing Global Services’ tailored flight simulator and maintenance training, which will help train SpiceJet's world-class pilots and mechanics in all areas of 737 MAX flight operations, resulting in maximised cost-savings. The airline also employs Onboard Performance Tool, powered by Boeing AnalytX, which allows flight crews and ground personnel to perform real-time calculations based on current weather and runway conditions, improving efficiency and maximising payloads.

The 737 MAX 8 is part of a family of airplanes that offer about 130 to 230 seats and the ability to fly up to 3,850 nautical miles (7,130 kilometers) or nearly eight hours of flight. For SpiceJet's full fleet of up to 205 airplanes, the MAX will emit up to 750,000 fewer metric tonnes of CO2 and save up to 240,000 metric tonnes of fuel per year, which translates to approximately more than $317 million in cost savings annually*.

In addition, the MAX 8 will have the lowest operating costs in the single-aisle market with an 8 percent per-seat advantage over the competition. The operating advantages along with the popular Boeing Sky Interior, explains why carriers have been choosing to fly the MAX.

The 737 MAX is the fastest-selling airplane in Boeing history, accumulating more than 4,700 orders from 104 customers worldwide.