April 20, 2020: SpiceJet has operated 300 domestic and 130 international cargo flights and carried 3300 cargo since the lockdown began. 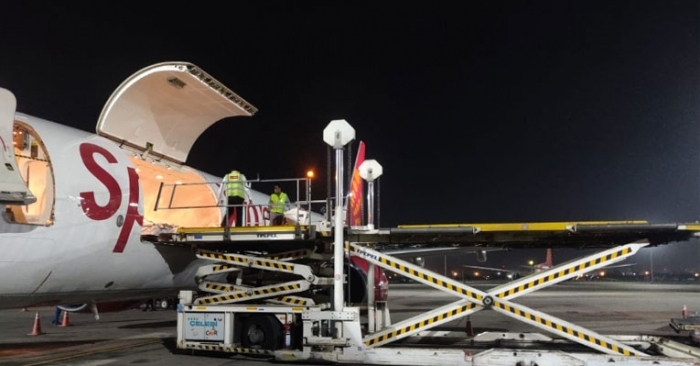 April 20, 2020: SpiceJet has operated 300 domestic and 130 international cargo flights and carried 3300 cargo since the lockdown began.

Early this morning, SpiceXpress freighter SG 7078 returned from Shanghai to Delhi, via Kolkata, carrying critical medical supplies to aid in the country’s #fightagainstcorona. Watch the supplies being offloaded after its arrival here.@drharshvardhan @HardeepSPuri @AjaySingh_SG pic.twitter.com/8QOdOFQ9sZ

April 15: SpiceJet operated a cargo freighter to carry medical supplies from Shanghai to Hyderabad and another freighter carrying farm produce from Kolkata to Colombo to help local farmers.

April 7 - SpiceJet operated India’s first cargo-on-seat flight carrying vital supplies in passenger cabin & belly space from Delhi to Chennai. Since then, the airline has been regularly deploying its B737 and Q400 passenger aircraft to carry cargo in the passenger cabin.

March 29 - SpiceJet operated a special flight from Delhi to Jodhpur for 136 Indian nationals evacuated from COVID-19 hit Iran who have been taken to a Government quarantine facility in the city.

March 27 - SpiceJet operated a special charter flight from Delhi to Coimbatore on government's request. This flight was operated at very short notice and carried a Hazmat suit. This will help local authorities replicate and start local manufacturing.