September 10, 2018: SpiceJet has announced the launch of its dedicated air cargo services and inducted its first freighter aircraft at a grand ceremony at the Indira Gandhi International airport in Delhi. 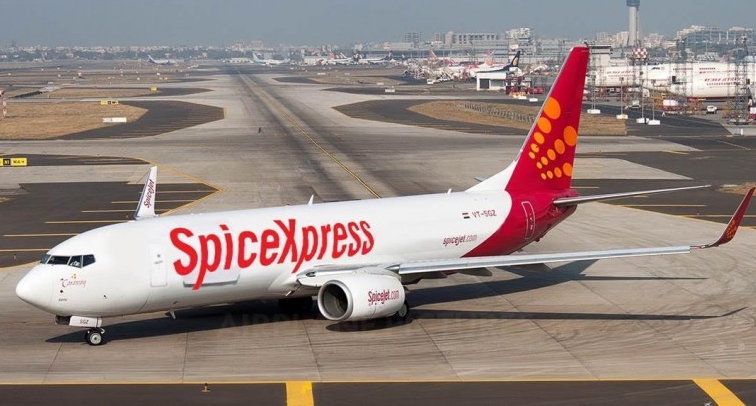 September 10, 2018: SpiceJet has announced the launch of its dedicated air cargo services and inducted its first freighter aircraft at a grand ceremony at the Indira Gandhi International airport in Delhi.

SpiceJet would operate the cargo services under the brand name SpiceXpress and has laid down a detailed plan covering both domestic and international routes. Much like SpiceJet’s commercial passenger aircraft fleet, the airline’s freighters fleet will consist of Boeing 737 planes and will be operated on an incremental direct operating cost model and extending its operations through its common pool of resources like pilots, engineers, ground staff, airport infrastructure.

The first freighter aircraft to be inducted by SpiceJet is a Boeing 737-700. SpiceJet plans to have an air cargo fleet with the first four freighters scheduled to be inducted in FY 2019. This unit will be operated as a separate business unit under SpiceJet Limited.

“We are very excited about the tremendous potential the logistics industry offers. There is a huge untapped market for air cargo services in India and a player like SpiceJet, with its low cost structure, is best suited to address this need,” said Ajay Singh, chairman and managing director, SpiceJet.

“The freighter aircraft will be acquired on pure operating leases and haven’t incurred any major CAPEX, while the ground operations will be either self-handled by the existing Spicejet ground infrastructure or shall be outsourced till we develop a certain scale of operations” Singh added.

SpiceXpress will launch operations on September 18, 2018. To begin with the air cargo operations will cover Delhi, Bengaluru, Guwahati, Hong Kong, Kabul and Amritsar.

The current cargo capacity of SpiceJet’s existing fleet is about 500 tonnes per day and with the launch of the dedicated freighter service this capacity would go up to 900 tonnes a day in a phased manner with the addition of four freighters by March 2019.

SpiceJet currently offers cargo capacity on its passenger aircraft fleet of 36 Boeing and 22 Q400s operating across 47 domestic and 7 international destinations. The added capacities through the acquisition of the freighters will enhance the airline’s existing cargo competence to 60 domestic destinations by the end of this year. SpiceJet aims to further ramp up this competence servicing up to 150 destinations across India, Asia and Europe by 2022.

The service will address time and temperature sensitive shipments across verticals, like letters and credit cards under banking, blood, organs, and medicines under pharma. Other shipments would include automobiles, apparels, consumer electronics, e-commerce and live animals. Besides, the airline will also ship perishables like farm fresh fruits and vegetables to the Middle East. Among its key features, SpiceXpress will offer Priority Based Delivery (PBD), Hour Based Delivery (HBD), Priority Cargo and Personalised Services (PSS) among others.