March 30, 2020: SpiceJet operated a special flight from Delhi to Jodhpur for 136 Indian nationals evacuated from Covid-19 hit Iran who have been taken to a government quarantine facility in the city. 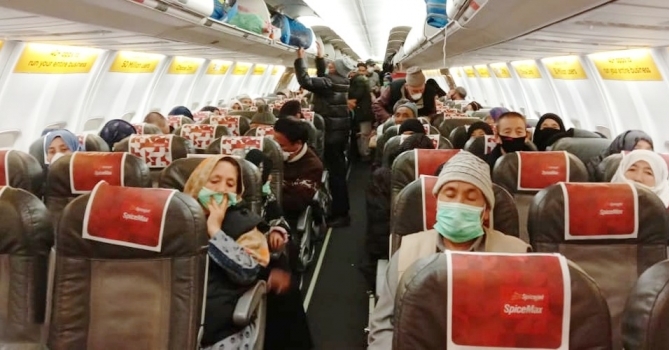 March 30, 2020: SpiceJet and Indigo operated special flights on Sunday from Delhi to Jodhpur for 275 Indian nationals evacuated from Covid-19 hit Iran who have been taken to a government quarantine facility in the city.

SpiceJet's SG 9001 and Indigo's 6E-9121 were operated as per Government of India’s request.

“The flight took off at 6:25 am from Delhi’s Indira Gandhi International airport and landed at Jodhpur airport at 8:20 am. All safety protocols laid down by the Government were strictly adhered to by crew members. The aircraft has been disinfected thoroughly after the flight,” says the release.

The joint fight against #COVID19 continues. SpiceJet had the honour to operate a special flight to fly 142 Indians, evacuated from Iran, from Delhi to a quarantine facility in Jodhpur.
All safety protocols were adhered to by the crew during this special flight.@AjaySingh_SG pic.twitter.com/EKB21t6rJk

Ajay Singh, chairman and managing director, SpiceJet, said, “We are proud to have operated this special flight to facilitate the transfer of 136 fellow Indians from Delhi to Jodhpur. We, at SpiceJet, stand committed to providing our services on each and every occasion of such national crisis and it will be our honour to assist in whatever way possible in future. SpiceJet has put its cargo fleet to optimum use to ensure that supplies of essential items, cold chain medical supplies, medicines, medical equipment and relief material are done in the shortest possible time. We are also providing doorstep deliveries to pharmaceutical companies, hospitals, diagnostic centres across the country.”

Our relief flight, 6E-9121, operated from Delhi to Jodhpur carrying 139 Indians, who were evacuated from Iran. Capt. Rajiv Batish and Capt. Vineet Soni operated the flight along with our team of cabin crew, led by Ms. Monalisa Sangma. #IndiGoCares #LetsIndiGo pic.twitter.com/kwbdR0Vood