October 10, 2019: In her first speech as the managing director of International Monetary Fund (IMF) after taking charge on October 1, Kristalina Georgieva warned that if the current trade war between Washington and Beijing continues, the world will face a ‘digital Berlin Wall’. 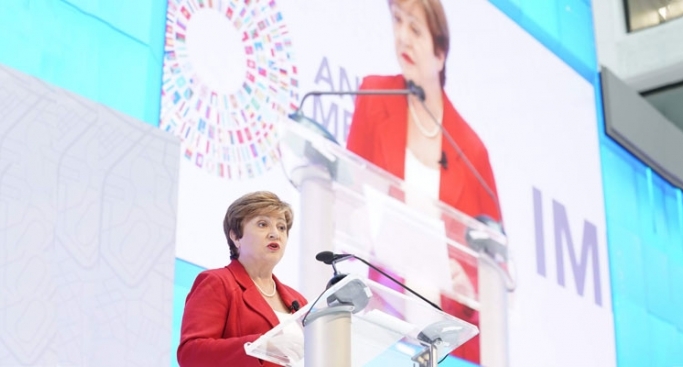 X
Kristalina Georgieva delivers her maiden speech on the state of the global economy ahead of the 2019 Annual IMF meetings, in Washington DC
Our Correspondent9 Oct 2019 11:37 AM GMT

October 10, 2019: In her first speech as the managing director of International Monetary Fund (IMF) after taking charge on October 1, Kristalina Georgieva warned that if the current trade war between Washington and Beijing continues, the world will face a ‘digital Berlin Wall’. The current rifts could lead to broken supply chains and siloed trade sectors that forces countries to choose between technology systems, she added.

The Bulgarian economist and former chief executive of the World Bank was talking at The Annual Meetings of the Boards of Governors of the World Bank Group (WBG) and the International Monetary Fund (IMF) in Washington DC on Tuesday. She urged the world nations to stand united as the world economy will face a "synchronized slowdown" in 90 percent of countries in 2019.

“The results are clear. Everyone loses in a trade war. For the global economy, the cumulative effect of trade conflicts could mean a loss of around $700 billion by 2020, or about 0.8 percent of GDP. As a reference, this is approximately the size of Switzerland’s entire economy,” said Georgieva.

The downward movement will be clear in the World Economic Outlook (WEO), coming out next week, published by IMF twice in a year. The report will showcase the projected global GDP loss from the rising trade war between the US and China. She pointed out to the updated analysis of how the loss of confidence and market reactions is directly connected to the direct costs on businesses and consumers from the three rounds of implemented and announced tariffs.

.@KGeorgieva: Countries will tailor fiscal policies to what works for them, but in every country reducing debt and deficits should always be done in a way that protects #education, #health, and #jobs. https://t.co/FIvDxcGQpH #IMFMeetings. pic.twitter.com/Jo11JuhuNC

Commenting on the effect on world economies, the IMF chief said, “In the United States and Germany, unemployment is at historic lows. Yet across advanced economies, including in the US, Japan, and especially the euro area, there is a softening of economic activity. In some of the largest emerging market economies, such as India and Brazil, the slowdown is even more pronounced this year. In China, growth is gradually coming down from the rapid pace it saw for many years.”