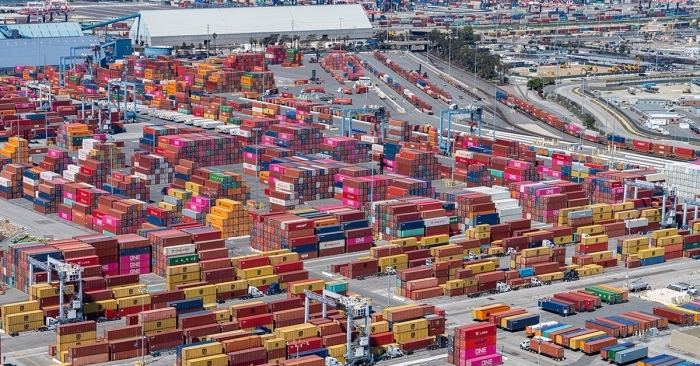 "Now imagine that in 2022, this figure is scheduled to increase by another 60,000 TEU per week to a new peak of 363,900 TEU," says Alan Murphy, CEO, Sea-Intelligence. "With no slowdown in deployed capacity during CNY in 2022, this high level of average weekly capacity in the 12 weeks that follow will put even more stress on the West Coast ports."

In terms of growth, 2022 will see capacity increase by over 20 percent (annualised) over 2019 in the 12 post-CNY weeks while Asia-North America East Coast "seeing a staggering over 40 percent increase, increasing the likelihood that the East Coast ports will also start to feel the stress of additional cargo."

"On a Y/Y level, schedule reliability was down 3.8 percentage points. Despite the low schedule reliability since January 2021 there hasn't been much fluctuation with the global scores largely between 30-40 percent. The average delay for late vessel arrivals decreased slightly to 7.38 days, the sixth consecutive month with the delay figure above 7 days," an official statement said.

"Some third-party booking agents were still offering as much as $15,000/FEU to the West Coast but uptake has dwindled as better rates have become available directly from carriers as space on ships departing China comes open from shipment cancellations," the report said.

Shippers were also less convinced that congestion at U.S. ports, and its depleting impact on carrying capacity was sufficient justification for premium surcharges, S&P said in its note. "The queue of ships waiting to berth at the Los Angeles/Long Beach port complex dropped February 28 to 58 ships, its lowest level since October while the worst congestion on the US East Coast, at Charleston port, had 24 ships at anchor waiting to berth March 3, down from more than 30 a week earlier."

A US-based freight forwarder told S&P: "There seem to be a lot of differences of opinion on the outlook for rates this year. I wonder a lot about how order books are looking in China, and with oil shooting up now, inflation is top of the mind of consumers. A lot of companies thought the strong fundamentals of 2021 would carry into 2022 but they may be proven wrong."

Ukraine conflict to hurt shipping growth: BIMCO
Though much uncertainty remains, the immediate commodity price increases and supply challenges caused by Russia's invasion of Ukraine are likely to be felt throughout 2022, says Niels Rasmussen, Chief Shipping Analyst, BIMCO. "Also, recently implemented sanctions on Russia are not likely to be lifted any time soon. This may have sustained spill-over impact on the global economy.

"All in all, we believe that despite possibilities of increasing tonne miles demand for certain commodities, the war in Ukraine is a net negative for the bulk market driven by both a lack of commodity supply and reduced demand due to price increases. Further steps to sanction some or all of Russia's exports could cause further disruption although we believe that China may continue to be a taker for Russian commodities.

Many of the largest container lines have decided to suspend bookings to and from Ukraine and Russia despite no sanctions currently being in place. "Neither Russia nor Ukraine are, however, key markets for the liners," says Rasmussen. Considering the very high global demand, the developments in the two countries should not be much of a concern for container rates or demand.

"On specific trades the loss of Russia and Ukraine volume may, however, be felt and we believe that this may be especially on some reefer trades," says Rasmussen. The impact of the war on the global economy and consumer confidence may however weaken growth prospects, he added. This could lead to an earlier "return to normal" from the current elevated demand, which in turn could ease congestion in ports. The impact, however, is likely some way off and in any case, longer-term contracts have already been signed at high rates.