Ready for challenges, opportunities posed by Brexit: Port of Antwerp

August 30, 2019: As the UK prepares to leave the European Union, in whichever form, Port of Antwerp anticipates a modal shift from ferry to container transport by shortsea shipping. 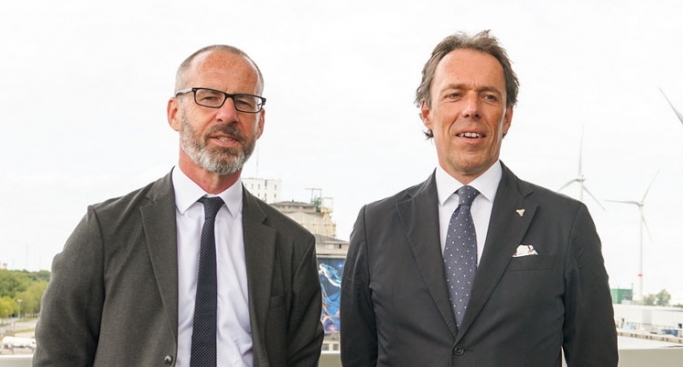 X
British ambassador Martin Shearman and Jacques Vandermeiren, CEO of Port of Antwerp during the former's visit to the port.
Our Correspondent30 Aug 2019 8:00 AM GMT

August 30, 2019: As the UK prepares to leave the European Union, in whichever form, Port of Antwerp anticipates a modal shift from ferry to container transport by shortsea shipping.

The newly appointed British ambassador Martin Shearman visited the Port of Antwerp recently to acquaint himself with the services offered by Europe's second-largest port and planning trade post Brexit.

"Good friends and trading partners continue to talk to each other even in difficult and uncertain times," said Jacques Vandermeiren, CEO of Port of Antwerp during his meeting with the ambassador.

Port of Antwerp said once Brexit comes along goods entering or leaving the EU by ferry ports will face more checks and red tape. More inspections of people, goods and documents, resulting in higher costs, congestion and longer transit times for ferry transport are anticipated.

"Port of Antwerp anticipates that accompanied trucks will increasingly be replaced by shortsea container transport, which by definition refers to unaccompanied goods loaded on board by crane for non-oceanic crossings. Port of Antwerp is therefore gearing up for further expansion of shortsea links with the UK, thus offering at least part of the solution for the consequences of Brexit. Today's visit should therefore make it clear to ambassador Shearman that after Brexit, Antwerp will more than ever be the main gateway for trade between Europe and the UK," a statement issued by the Port of Antwerp said.

Welcome @Martin_Shearman, newly appointed British ambassador, in the @PortofAntwerp. We discussed how Brexit can turn into an opportunity for supply chains between UK and EU. Shifting from ferry to short sea container transport makes a more reliable chain. https://t.co/1RAtfUG44X pic.twitter.com/aGrGjgyBpo

In 2016, shortly after the British Brexit referendum in 2016, Port of Antwerp put together a taskforce of ‘Brexperts’ that worked with different stakeholders including Belgian Customs, the Belgian Food Safety Agency and major port community and business representatives to mitigate any negative consequences for the port.

"Brexit creates not only challenges but also opportunities for trade between the UK and Ireland on the one hand and the European continent on the other. Having more shortsea solutions in the logistics chain will not only mean greater reliability, it will also diminish our dependence on trucks for 'last mile' transport, as well as reducing costs and CO2 emissions," declared Justin Atkin, the Port of Antwerp representative in the UK and Ireland.

The customs authorities for their part are also getting ready. "We have already hired an additional 386 full-time employees in order to deal with Brexit. With 930,000 more import declarations and 4.5 million more export declarations the challenge facing us is enormous," explained Kristian Vanderwaeren, director general of Belgian Customs & Excise.

Port of Antwerp has also published a white paper titled "Think Brexit will get your berries into a jam?" that takes a hard look at their logistics chain and also contains practical information on ways of using shortsea.