September 20, 2018: Qatar Airways has taken delivery of two Boeing 777 freighters. The airline had signed a deal to buy five of those freighters in July in a deal worth $1.7 billion. It also revealed an order for two Boeing 747-8 freighters. 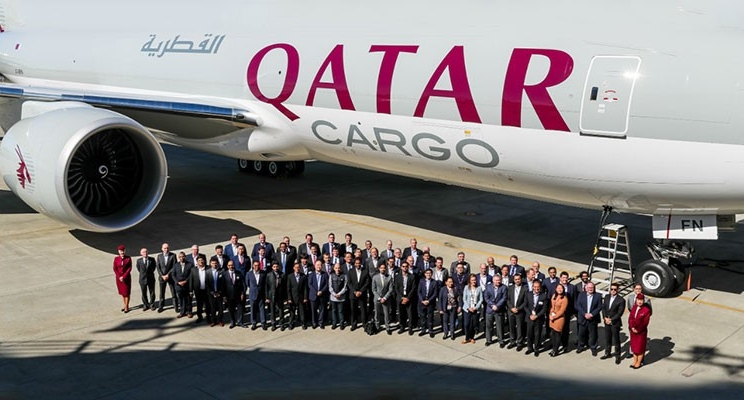 September 20, 2018: Qatar Airways has taken delivery of two Boeing 777 freighters. The airline had signed a deal in July, worth $1.7 billion, to buy five of those freighters. It also revealed an order for two Boeing 747-8 freighters.

The visit provided Al Baker and visiting guests the opportunity to view Boeing’s 777X, the manufacturer’s latest-generation aircraft for which Qatar Airways is a global launch customer.

Building on the passenger-preferred and market-leading 777, the Boeing 777X is the largest and an efficient twin-engine jet in the world, incorporating 787 Dreamliner technologies and new advances like wider cabin, larger windows and enhanced architecture.

Al Baker said, “We are tremendously proud of our relationship with Boeing, and our visit is further evidence of our commitment to expanding our fleet to include the most technologically-advanced and efficient aircraft on the market. We are especially pleased to have had this opportunity to view the Boeing 777X, and are very proud to be a global launch customer for this product.”

Meanwhile, Boeing Commercial Airplanes president and chief executive officer Kevin McAllister said, “Boeing is proud of its long-standing relationship with Qatar Airways and the confidence that the airline has consistently shown in our aircraft. We are honoured to host Qatar Airways at the Everett factory and to have the opportunity to share an up-close look at the 777X, which will be the largest and most efficient twin-engine jet in the world when it enters revenue service in 2020.”

Qatar Airways was the first airline to operate the Boeing 787 in the Middle East. The airline currently operates a modern fleet of more than 200 aircraft via its hub, Hamad International Airport (HIA) to more than 150 destinations worldwide. Earlier this year, Qatar Airways revealed a host of forthcoming global destinations in line with its expedited expansion plans, including Gothenburg, Sweden; Da Nang, Vietnam and Mombasa, Kenya.