September 3, 2019: Qatar Airways has launched its new office in Amman, Jordan. The airline has 21 weekly flights (three flights per day) from Doha to the Jordanian capital. 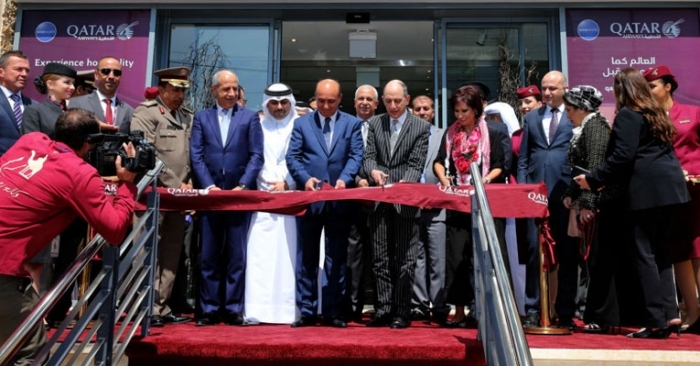 X
The inauguration was done in the presence of transport minister of Jordan, Eng. Anmar Khasawneh and Qatar Airways Group chief executive, Akbar Al Baker.
Our Correspondent3 Sep 2019 7:21 AM GMT

September 3, 2019: Qatar Airways has launched its new office in Amman, Jordan. The airline has 21 weekly flights (three flights per day) from Doha to the Jordanian capital.

The ceremony was also attended by several senior officials and VIPs, including minister of tourism and antiquities of Jordan, Majd Shweikeh, and the minister of digital economy and entrepreneurship of Jordan, Mothanna Ghairaibeh.

Other notable figures who attended the ribbon-cutting ceremony include the Ambassador of Jordan to Qatar Zaid Al Lozi; chairman of the board of commissioners of the civil aviation regulatory authority of Jordan Captain Haitham Misto; and interim Chargé d'affaires of the Embassy of the State of Qatar to Jordan Abdulaziz bin Mohammed Khalifa Al Sada.

Speaking at the media roundtable in Amman, Al Baker, said, “Jordan is an integral market for Qatar Airways, where we operate three daily flights to Amman using wide-body aircraft, including the state-of-the-art Airbus A350. The opening of our new offices in the Kingdom comes as a response to the growing demand for quality flights, in addition to serving as further confirmation that Qatar Airways has become the airline of choice for discerning travellers from Jordan. We are looking forward to further enhancing our offerings and services in Jordan and are certain that the launch of our new offices will help us achieve our goal."

Qatar Airways launched its first flight to Amman in 1994. Qatar Airways entered into a codeshare agreement with Royal Jordanian Airlines in 2015, allowing both airlines to reach various additional destinations around the world. The agreement recently expanded to allow passengers to fly to East Asia through Hamad International Airport.