February 11, 2019: Prime Minister Narendra Modi recently laid the foundation stone for the construction of a greenfield airport at Hollongi Airport in Arunachal Pradesh. 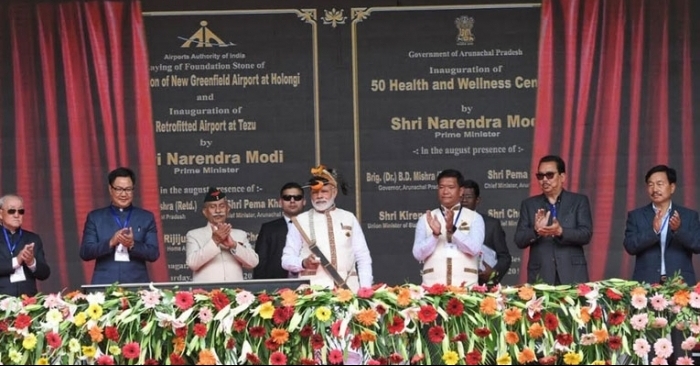 February 11, 2019: Prime Minister Narendra Modi recently laid the foundation stone for the construction of a greenfield airport at Hollongi Airport in Arunachal Pradesh.

Considering the importance of air connectivity to the capital city of Arunachal Pradesh, the airport is proposed to be constructed at Hollongi, 15 kilometres from Itanagar. Planned on 667 acres of land the airport will be able to handle Airbus -320 type of aircraft operations.

The new domestic terminal building of the greenfield airport will have an area of 4100 square metre to handle a peak hour capacity of 200 passengers. The terminal will be equipped with all modern passenger facilities, consisting of pre-engineered structure with glass and steel envelop having profile sheet roofing on steel truss.

While addressing the public gathering, the PM said "The new project will be completed in record time for better connectivity for people of Arunachal Pradesh."

Itanagar, the capital of Arunachal Pradesh is situated at the foothills of Himalayas. Presently no airport exists in vicinity of Itanagar, the closest one being Lilabari Airport which is at a distance of 80 kilometre in the state of Assam and takes around 3 hours to reach by road. An airport to connect the capital city is a much needed aspiration of local community which will also act as a primary gateway to the state of Arunachal Pradesh.

The Prime Minister also inaugurated the Retrofitted Tezu Airport on this occasion. AAI under took the development and up gradation work for ATR-72 type of aircraft operations on request of state government. After the extension of runway and refurbishment of existing terminal building, the airport is ready for operations of ATR-72 type of aircraft. In order to provide better services in future, a modern terminal building has also been planned for Tezu Airport.

Hollongi and Tezu Airport will fulfill the aspirations of local community of flying and will also play a significant role in boosting tourism and comprehensive development of the region.