April 24, 2021: Oxygen Expresses of Indian Railways transported Liquid Medical Oxygen (LMO) tankers with over 150 tonnes of oxygen across the country in the last 24 hours amid a severe shortage of medical oxygen in different parts of India. 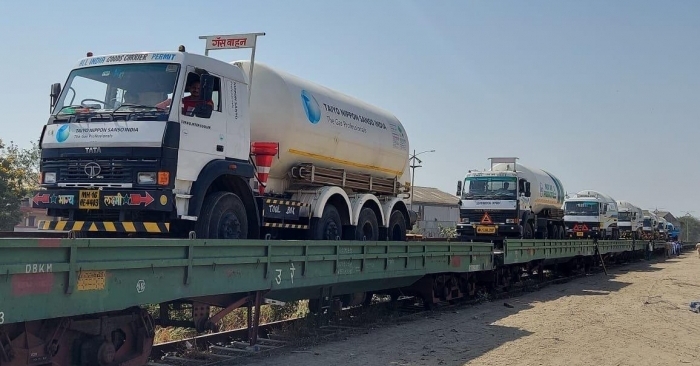 X
To fulfil the requirements of medical oxygen in Uttar Pradesh, for the movement of the train, a green corridor was created between Lucknow to Varanasi.
Our Correspondent24 April 2021 3:45 PM GMT

April 24, 2021: Oxygen Expresses of Indian Railways transported Liquid Medical Oxygen (LMO) tankers with over 150 tonnes of oxygen across the country in the last 24 hours amid a severe shortage of medical oxygen in different parts of India.

"A total of 10 containers having nearly 150 tonnes of oxygen have been carried so far," reads the ministry of railways release.

Hospitals across the Covid-19 hit states have reported a severe shortage of medical oxygen and has also led to loss of lives. It is also noted that India has a sufficient supply of medical oxygen however the unavailability of containers and tankers caused the scarcity.

For example, Liquid Medical Oxygen tankers have arrived at Nashik & Lucknow for Maharashtra and Uttar Pradesh respectively. Few containers were also unloaded at Nagpur and Varanasi en route to supply LMO in these regions. Also, the third Oxygen Express started its journey from Lucknow.

Prime minister Narendra Modi today chaired a meeting to review steps taken to boost oxygen availability in the country. PM stressed that all ministries and departments need to work in synergy to increase the availability of oxygen and medical supplies.

A release of the ministry of finance reads, "The government of India has taken a lot of measures in the last few days to improve the supply of oxygen and medical supplies. IAF planes are bringing in cryogenic oxygen tanks from Singapore. IAF is also transporting oxygen tanks in the country to reduce travel times."

Railways ran the first oxygen express from Kalamboli to Vizag and back up to Nasik. The moment railways got the request, made ramps at various places immediately for the movement of liquid medical oxygen tankers.

The distance between Kalamboli and Vizag is more than 1850 km which was completed by these tankers in about 50 hours. 7 tankers with more than 100 tonnes LMO were loaded in 10 hrs and transported back to Nagpur in only 21 hrs. Railways have unloaded 3 tankers in Nagpur yesterday and the remaining 4 tankers have reached Nashik at 10.25 am today i.e. in just 12 hrs time from Nagpur to Nashik.

"For the movement of Ro-Ro service Railways had to map the entire route considering the various constraints like ghat sections, the road over bridges, tunnels, curves, platform canopies, overhead equipment etc. at certain locations. Because height is an important aspect in this movement, Railways mapped the route via Vasai. The model of road tanker T1618 with a height of 3320 mm was found feasible to be placed on flat wagons. The longer route via Vasai was charted as Over Dimensional Cargo (ODC) is not permitted to travel in ghat sections over Mumbai division," reads the ministry of railways release.

States like Andhra Pradesh, Delhi are in consultation with railways to run more such trains. It may be noted that tankers filled with LMO at Visakhapatnam & Bokaro are presently being transported through the Ro-Ro service of Indian Railways.

To fulfil the requirements of medical oxygen in Uttar Pradesh, for the movement of the train, a green corridor was created between Lucknow to Varanasi. The distance of 270 kilometres was covered by the train in 4 hours 20 minutes with an average speed of 62.35 kmph.

As oxygen is a cryogenic and hazardous chemical, Railways have to avoid sudden acceleration, deceleration, have to check pressures in between, especially when it is in the loaded condition. Yet, railways took it as a challenge, mapped the route, trained people and could take these particular size tankers to the Vizag via Vasai, Surat, Bhusaval, Nagpur route.

Transportation of oxygen through trains is faster over long distances than road transport. Transportation through rail takes 2 days while through road it takes 3 days. Trains can run 24 hours a day but truck drivers need to take halts etc.