DB Schenker and Lufthansa Cargo today announced that they will extend their weekly CO2-free freighter flights between Frankfurt and Shanghai throughout the entire winter flight schedule until March 2022 as now Nokia has signed up to the initiative. 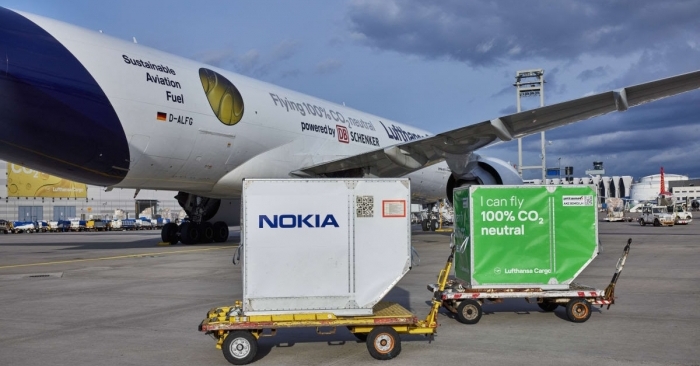 October 28, 2021: DB Schenker and Lufthansa Cargo today announced that they will extend their weekly CO2-free freighter flights between Frankfurt and Shanghai throughout the entire winter flight schedule until March 2022 as now Nokia has signed up to the initiative.

The fuel requirement for the flight rotation from Frankfurt (FRA) to Shanghai (PVG) and back is covered entirely by SAF. This saves around 174 tonnes of conventional kerosene every week. During the summer flight schedule 2021, the initiative successfully achieved a net reduction of 20,250 tonnes of greenhouse gases (CO2e). In the upcoming winter flight schedule, from the end of October 2021 to the end of March 2022, another 14,175 tonnes are expected.

Thorsten Meincke, global board member for air & ocean freight at DB Schenker, “The SAF full charter flight rotation is a game-changer as it goes beyond a pay-per-use scheme. We are pleased to have Nokia on board as a new major customer for our westbound flights.”

Tommi Uitto, president of mobile networks at Nokia, “We constantly seek to reduce our transportation and logistics carbon footprint, and air cargo is a significant contributor. This collaboration to transport our 5G equipment on carbon-neutral flights is another important step.”

Over the next five months, Nokia will be using the carbon-neutral flight offer to ship a weekly freight volume of 10 tonnes of communications network equipment from a production facility in Shanghai to its European hub in Tilburg in the Netherlands. This shipment is entirely covered by SAF to reduce 100 percent of carbon emissions during the life cycle, avoiding any offsetting. The end-to-end agreement with DB Schenker covers both the air and land transport of the goods from Shanghai to Tilburg. All land transport elements will be covered utilizing another advanced type of biofuel, hydrogenated vegetable oil (HVO).

Ashwin Bhat, chief commercial officer at Lufthansa Cargo, “Using SAF is one possibility to fly CO2-neutral already today. We are very proud that we can extend our partnership with DB Schenker throughout the upcoming months. We strongly believe that transforming our business into CO2-neutral air freight can best be achieved when all of us join their forces.”

Today’s announcement follows DB Schenker and Lufthansa Cargo’s launch of the world’s first CO2-neutral freighter rotation between Europe and Asia in November 2020. Starting with the summer flight schedule in April 2021, a regular freighter line connection was brought to the market.

The SAF for this collaboration is entirely produced from waste and residue raw materials, for example from used cooking oils. The CO2 released during combustion in the engine, is only the CO2 which was removed from the atmosphere during the photosynthesis phase of the plants that were utilized to produce the oils. Currently, SAF is around three times more expensive than conventional fossil kerosene.

The greenhouse gas emissions during the production and transport of the fuel are fully compensated with certified offset projects, ensuring the complete greenhouse gas neutrality of the flights. Alternatively, the customer may go for a full inset solution – as chosen by Nokia for their freight. This is by far the most sustainable option currently on the market. It is an actual “carbon zero” solution.

In the future, other types of renewable fuels will also be available. The best-known production process for this is the so-called power-to-liquid concept (PtL) based on renewable electricity, water, and CO2. While PtL production quantities are still very limited, biomass-based SAF is an already available and well-tested fuel today.

The SAF used for the DB Schenker and Lufthansa Cargo flight connection is produced by Neste, the world’s leading provider of sustainable fuel. The Finnish producer is currently increasing its Neste MY Sustainable Aviation Fuel production to 1.5 million tons annually by the end of 2023.