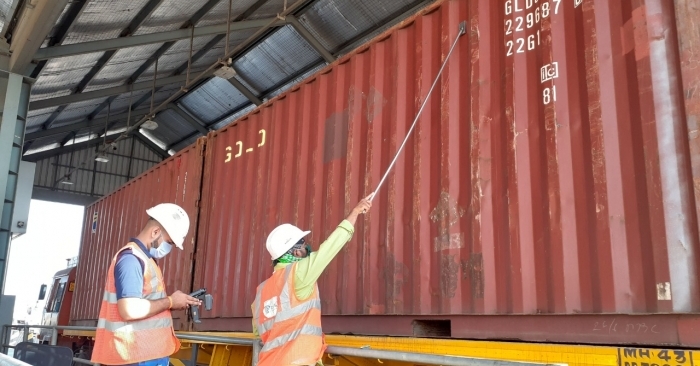 Major SEZs include Visakhapatnam, SEEPZ Mumbai, Surat, MEPZ Chennai, Cochin, Kandla, Noida, Mangalore and Dahez SEZ. With container tracking services now live at these locations, exporters and importers will be able to get near-real-time location information on container movement from ports to SEZs.

The idea for NLDS’ service extension was first proposed during NLDSL’s Logistics Data Bank (LDB)’s open house session held in January last year under the chairmanship of Dr Guruprasad Mohapatra, secretary, department for promotion of industry and internal trade. During the event, stakeholders in the EXIM industry requested to install RFID readers at industrial zones, manufacturing hubs and SEZs, which would enable them to receive timely updates on last-mile cargo and improve supply chain efficiency.

Subsequently, NLDS proposed to install RFID readers through various consultations and discussions with key stakeholders from industry and the Ministry of Commerce & Industry. NLDSL approached individual SEZs separately to conduct site surveys prior to the RFID system going live.

As of today, site surveys have been conducted for the nine (9) SEZs between January and February 2021 and the installation of RFID readers was recently completed.

A Bipin Menon, development commissioner, NOIDA Special Economic Zone, highlighted the importance of the LDB project stating that, “Technology has been playing a crucial role in revamping major businesses and sentiments of the industry. Such trade facilitator initiatives during turbulent times will help the manufacturing, warehousing and trading sectors at SEZs to reduce their logistics cost and improve tracking of their container movement.”

Surajit Sarkar, COO, NLDS said, “We are in conversations with multiple SEZs across the country to explore the possibilities of installation of RFID readers for providing better and end to end visibility for exporters and importers.”

The NLDS container tracking solution and its analytics report have significantly benefited various stakeholders in supply chain operations by considerably reducing the port dwell time and overall transportation time for export and import of shipments.

Abhishek Chaudhary, VP-corporate affairs, NICDC and Director NLDS, said, “Reducing overall logistics cost and providing end to end visibility is the need of the hour for the Indian Logistics Industry. In a major strategic push, we have extended LDB services to 9 major SEZs of India. With the nation embarking on digital transformation, LDB will play an instrumental role in further improving the efficiency of the sector by integrating across multiple platforms.”

NLDS is proud to announce that LDB will be extending its services to 9 major SEZs across India. Exporters and Importers will now get tracking information on container movement from ports to SEZs with the help of LDB's live tracking services. Read more at: https://t.co/EtFodicu0J pic.twitter.com/letVEkZFoW