October 2, 2020: National Airlines has expanded its fleet with three more B747-400Fs and an A330-200 passenger aircraft in response to the growing demand for cargo and passenger charters. 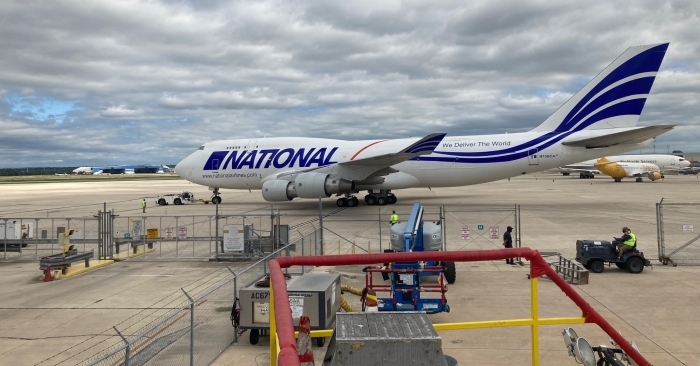 X
The first of the three B747-400Fs will join the fleet this first week of October and will begin commercial operations.
Our Correspondent2 Oct 2020 6:55 AM GMT

October 2, 2020: National Airlines has expanded its fleet with three more B747-400Fs and an A330-200 passenger aircraft in response to the growing demand for cargo and passenger charters.

The first of the three B747-400Fs will join the fleet this first week of October and will begin commercial operations. This will be followed by the second joining in later this month and the third will join in November this year, making a total fleet of five B-747-400Fs.

National Airlines’ current fleet includes two B747-400Fs and one B757-200. The Airbus A330-200 passenger aircraft, which has already joined the fleet, is deployed primarily for charters and contract flying for its corporate and government customers.

Bringing parked aircraft back
National had acquired three B-747-400Fs two years back and because of the declining demand for airfreight all of them had been parked in Arizona. Current market conditions have prompted National to pull them out of storage now and quickly induct them into service after completing all the required maintenance checks.

Chris Alf, chairman, National, said: “We always had a plan of bringing out the parked airplanes into service right at the beginning of the year but then the Covid-19 pandemic hit. We felt the urgency to bring on these aircraft to support the demand for moving the urgent relief supplies in support of governments and global aid agencies. It was strategically important for us to bring in additional cargo capacity since there is a huge constraint because of the pandemic taking away the belly capacity on passenger operations. We are happy to offer our global customers with an additional three B747-400Fs.”

Airbus A330-200
The Airbus A330-200 passenger aircraft, the only wide-body passenger aircraft in National’s fleet, is one of the most reliable and modern twin-aisle wide-body aircraft providing passengers with an exceptional amount of personal space and travel comfort. National’s A330-200 has 288 seats in a two-class configuration with fourth-generation inflight entertainment at each seat.

National currently supports the demand for passenger charters from the US government with its B757. With the new addition of the A330-200, National is now able to enhance its service to its existing customers with high passenger capacity and longer range.

National B747-400Fs are flying between the USA into the Middle East, China, and Hong Kong on a daily basis.

The Boeing B757-200 passenger aircraft