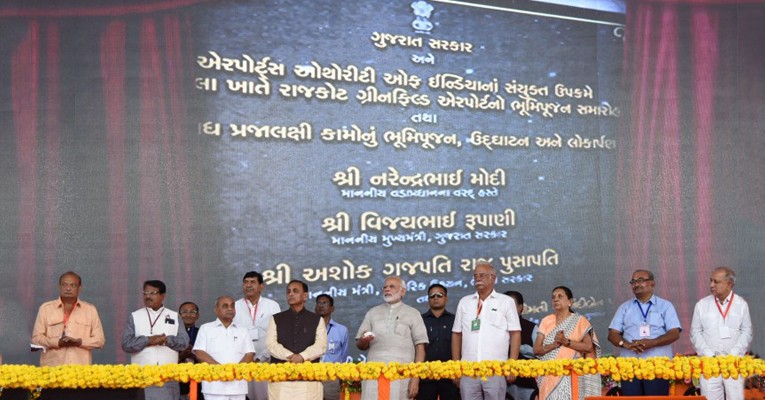 October 7, 2017: Prime Minister Narendra Modi laid the foundation of a greenfield airport in Rajkot. The state government of Gujarat had proposed a greenfield airport at Hirasar, Rajkot as the existing airport is capacity constrained with no further scope for expansion and upgradation due to urbanization and commercial development around the existing airport. The proposed site for the greenfield airport measuring 2534 acres is next to the National Highway (NH-8B) connecting Ahmedabad and Rajkot and is located 27 kilometre east of the existing Rajkot Airport. An area of 293.255 hectares was handed over by the state government to Airports Authority of India (AAI) in August this year.

The AAI in a press release said that the airport is going to have many environment-friendly features like double insulated roofing system, rainwater harvesting system to recharge the ground water level, usage of eco-friendly local building material, LED lighting, sensor-fitted electrical and sanitary fittings, energy efficient chillers, solar power system and a green belt along the periphery of the airport and along the approach road to act as a noise barrier.

While addressing the attendees during the ceremony, PM Modi said that 96 percent of the land used for the new airport coming up between Rajkot and Surendranagar districts, is barren land of the government of Gujarat.

Commenting on the airport project being handled by AAI, the civil aviation minister said, “Rajkot is the fourth largest city in the state of Gujarat. Since the existing airport has no scope of further expansion and is not positioned well to meet the potential traffic demand, the new airport being constructed by AAI will surely meet the futuristic demands of Rajkot and will further add to the infrastructural development of this expanding city.”