December 28, 2017: The first aircraft carrying perishables has arrived at the Mumbai Airport from Kabul, Afghanistan, after a dedicated air freight c 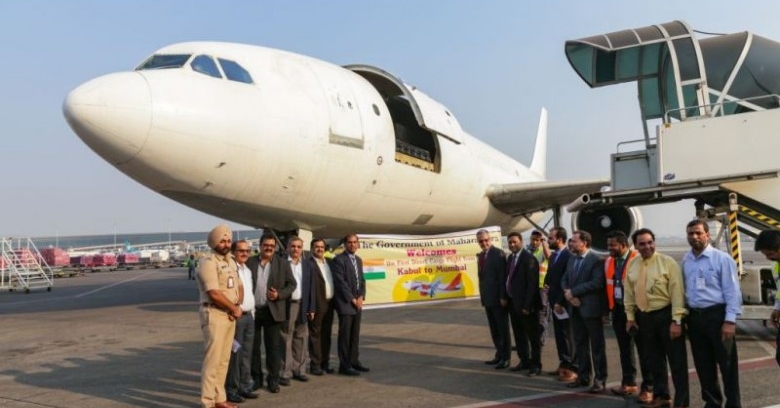 December 28, 2017: The first aircraft carrying perishables has arrived at the Mumbai Airport from Kabul, Afghanistan, after a dedicated air freight corridor was inaugurated between the two cities. This was planned during a meeting between Indian Prime Minister Narendra Modi and Afghanistan President Ashraf Ghani in Kabul in September 2016.

An initiative implemented with the joint efforts of Afghanistan vice-president Danish Sarwar and Maharashtra Governor C Vidyasagar Rao, this connectivity, established through the air-freight corridor, will provide the land-locked Afghanistan greater access to markets in Maharashtra. Additionally, it will allow Afghan businessmen to leverage the economic growth, enhance trade networks and offer Afghan farmers direct access to the markets in western India for their perishable goods.

This event was graced by the Principal Secretary – Government of Maharashtra, Diplomats from the office of governor of Maharashtra and officials of the Consulate General of Afghanistan. The honorable dignitaries along with officials of Mumbai International Airport welcomed the inaugural flight routed Kabul-Mumbai-Kabul which carried on the inbound 40 tonnes of fresh apples and on the outbound 20 tonnes of bananas along with 20 tonnes of fresh tomatoes.

At present, the current volume of trade between the two nations stands at roughly $350 million with a goal of the two governments to increase it to around $1 billion in the coming three years. The major exports from India to Afghanistan constitute of man-made filaments, articles of apparels and clothing accessories, pharmaceutical products, cereals, staple fibres, dairy and poultry products, spices to name a few. While major imports from Afghanistan include fresh fruits, dried fruits/nuts, vegetable, oil seeds, precious, semi-precious stones etc.

Earlier, transporting cargo by road, comprising of mostly perishable goods was difficult since it not only faced logistical problems but also added to the cost of the goods while they passed through various states. The inauguration of the Kabul-Mumbai air corridor received an overwhelming response from traders on both sides. With an expected increase in the frequency of cargo exchange in the coming months facilitated by the Mumbai airport, India and Afghanistan are on the threshold of becoming long-term trade partners.

The move was a part of the Government of India’s agenda to strengthen the bilateral trade relations between India and Afghanistan.